50 (+0% DMG)
Trolls are very weak enemies that appear early in the game and once again near the end of the game. They are among the few enemies that the player can't play as besides the large bosses. Trolls are known to ambush in high quantity, creating the only real danger from this enemy.

The Trolls usually hide and spring out when the player passes. They appear as diminutive, black, fur covered balls of sticks.

The Trolls are usually armed with Twigs. They also spawn off the Troll Mother during combat, as it is the Mother Troll's only means of protection from you. 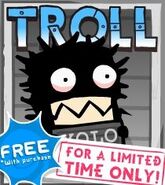 The Troll Head in the game Battleblock Theater.

A Troll that literally turns off the lights on the unfortunate Trial version players during the Barbarian Boss Fight.