50 (+0% DMG)
Thief is one of the 31 Playable Characters in the game Castle Crashers. Their magical attacks are Non-Elemental and their starting weapon is the Thief Sword.

Thieves are one of the most commonly seen enemies throughout the game. They first appear in the Barbarian War level, where a Thief is looting a dead Gray Knight body, this is also where the player(s) first get the Bow and Arrow which they keep permanently.

Thirdly, the Thieves will make a deal with Prince Philipe, the Industrial Prince with his Fencer bodyguard of sort in Forest Entrance; the deal being taking the Orange Princess to the Industrial Castle. The enemy making the deal in question, is a Beefy Thief.

Fourthly, the Thieves are briefly seen taking the Green Princess and Blue Princess through the forest in Thieves' Forest during which, there are many Thieves waiting to ambush the player(s). Later on in the same level, the player(s) can see that they have their own little establishment of stolen things out in the open near the Troll Mother fight. 3 Thieves get scared off by the Troll Mother that was in the Abandoned Mill.

Immediately afterwards, the player(s) encounter the Thieves looting the carriage that the Cyclops abandoned, and they are grouped up with a couple of Coneheads that come from the cave entrance to ambush the player(s) in Cyclops' Cave.

Finally, a Thief is shooting arrows at a target impressing the Blue Princess and making the Gray Knights around the Thief nervous in Barracks after the player(s) kill the Evil Wizard, get on the crystal, and sit through the End Credits in Final Battle.

Thieves own all of the land in and around Thieves' Forest and when Thieves shoot arrows, they'll always move in a straight line never dropping midair.

to perform. Arrows rain down from the sky in front of the character in groups of three. Each upgrade adds another set of three arrows, but each set of arrows can only hit the same enemy once per set. Knocks enemies over and can't be blocked. A total of 8 characters (including Thief) share the same exact Splash Attack.

to perform. A spinning knife used as a Magic Projectile.

to perform. A spinning knife used as an Air Projectile.

Thief's respective "Arrow Rain" Splash Attack and "Knife" Magic Projectile and Air Projectile make him a member of the fan nicknamed "Arrow Rainers". Bland and common characters that show off nothing special at all. These are considered to be the gold standard for Castle Crashers, as they are painfully below average and are not unique, unlike the characters below them. These are the aforementioned Thief, Stove Face, Peasant, Civilian, and Open-Faced Gray Knight.

Mediocre character in Castle Crashers. Struggles in difficult levels like Desert and Full Moon. To make the best of Thief, it is advised to use a high Strength weapon or a high Magic weapon that does not reduce Strength. Attribute to Magic for the Elemental Infusion first, or attribute to Agility first. The top 5 Animal Orbs in Snoot, Burly Bear, Hawkster, Piggy, and BiPolar Bear will suffice.

The gold standard of Arena. The Splash Attack is not reliable for hitting opponents or for resets. 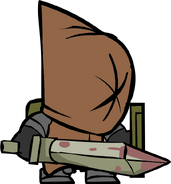 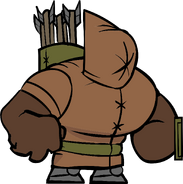 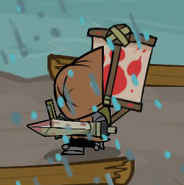 A Thief wearing the Bear banner in the Tall Grass Field level. 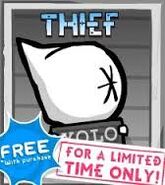 A limited time only head for the game BattleBlock Theater.

Iceskimo; a character that looks very similar to Thief.

Snakey; the character that Thief unlocks after completing the game.