Thieves
Bears
Bear Boss
Rammy
Hawkster
Burly Bear
Frost King
Cyclops
King
Gray Knights
Bats
Tall Grass Field is the tenth level in the game Castle Crashers. It should present little challenge to most players. On Insane Mode, the same can be said although a Beefy Bear's Windmill combo will easily kill players with low Defense if they are unaware of when they come in or have little to no familiarity with the level.

The level begins with the boat from the Catfish level to the left, and some Gray Knights pitching tents and constructing catapults, as well as the King pacing around.

Next to the second tent lies a sign. Come back to the level after defeating Corn Boss and use the Horn obtained at the end of the corn boss level in order to obtain Hawkster.

To the right, the Bear Boss is seen with his Animal Orb: Rammy.

The Bear Boss will perform his rain dance. This will cause the weather to change to rain. Focus on taking him out, as other bears (Always 3 bears) will constantly respawn until he has died. Watch out for his tornado move; wait for him to reappear then continue to beat him up. Once he has been defeated, any other Bears fighting with him will die. Before proceeding, be sure to grab Rammy.

To the right will be two bears manning a contraption that constantly fires arrows. Move through it with your shield until you're close enough to destroy one of the contraptions. The bear will die immediately after the explosion.

You will soon find a rocky mountain side which you'll want to come back to later when you have Bombs and Sandwiches (See below). Climb up and onto the mountain where you'll find the Blue and Green Princesses being handed to cloaked Ice King and Cyclops. The Ice King will leave via teleportation while the Cyclops exits into the cave to the right.

Enter the cave to the right where the Pipistrello's Cave level starts but not before several Bats emerge out of the cave. 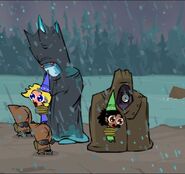