Complete the game with Gray Knight

60 (-20% DMG)
Stove Face is one of the 31 Playable Characters in the game Castle Crashers. Their magical attacks are Non-Elemental and their starting weapon is the Gladiator Sword.

The Stove Face stands in the way of the player on the Full Moon level, where they make their first and only appearance in the game. A large army of them will attack the player as the player attempts to scale the mountain.

It is assumed that Stove Faces, just like Iceskimos, serve the Frost King. This makes sense as Iceskimos don't attack the Stove Faces, or that they just have a common enemy. However, they may also just scout the Full Moon level for territory reasons.

Stove Faces are only seen in Full Moon.

Stove Faces wears full black/dark grayish armor with a six pack somewhat visible and, as their name their name suggests, they have a helmet resembling a normal Knight helmet with 4 possible small rusts or scratchs on their upper laterals; 3 being in the left, and 1 in the right, with a extra stove-like face-helm (in which also resembles a rhombus with 4 horizontal stripes (2 upper stripes serving as eye hole) and other 3 vertical stripes along with other metallic features), and a thinner one in the middle of the helm) connected to spheres protecting their face, with white irises or pupils coming out of the helmet. Their arms and legs also have darker textures than their common armor color, and they have metal shoes with spheres over them (something most enemies/characters have).

In their portrait, their eyes are glowing and are inside the helmet. The pauldrons haves a different shape, and part of their cuirass is shaped as a 2 door stove without the doors, or a ladder. They also lost a scratch on their helmet.

Non-Playable Enemy Stove Faces wield the Gladiator Sword or Butcher Knife; however, Stove Faces will only wield the Butcher Knife in Castle Crashers Remastered. This is seemingly as a way to balance out the fact that the Gladiator Sword can Critical Strike the player(s) for a good chunk of damage or outright kill. Arguably, Stove Faces are the bane of the casual player's existence. Both Playable and Non-Playable Stove Face characters will be equipped with a black shield with a spike appendage protruding out.

to perform. Arrows rain down from the sky in front of the character in groups of three. Each upgrade adds another set of three arrows, but each set of arrows can only hit the same enemy once per set. Knocks enemies over and can't be blocked. A total of 8 characters (including Stove Face) share the same exact Splash Attack.

to perform. A spinning knife used as a Magic Projectile.

to perform. A spinning knife used as an Air Projectile.

Stove Face's respective "Arrow Rain" Splash Attack and "Knife" Magic Projectile and Air Projectile make him a member of the fan nicknamed "Arrow Rainers". Bland and common characters that show off nothing special at all. These are considered to be the gold standard for Castle Crashers, as they are painfully below average and are not unique, unlike the characters below them. These are the aforementioned Stove Face, Thief, Peasant, Civilian, and Open-Faced Gray Knight.

Mediocre character in Castle Crashers. Struggles in difficult levels like Desert and Full Moon. To make the best of Stove Face, it is advised to use a high Strength weapon or a high Magic weapon that does not reduce Strength. Attribute to Magic for the Elemental Infusion first, or attribute to Agility first. The top 5 Animal Orbs in Snoot, Burly Bear, Hawkster, Piggy, and BiPolar Bear will suffice.

The gold standard of Arena. The Splash Attack is not reliable for hitting opponents or for resets. 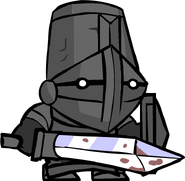 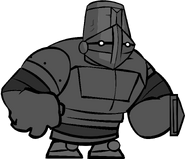 Gray Knight; the character required to unlock Stove Face after completing the game.

A Beefy Stove Face chucking a boulder toward the player in Full Moon.

Stove Face glitch showing the 3rd Beefy Stove Face turning into a regular Stove Face for a split second before returning back into a Beefy in Full Moon. 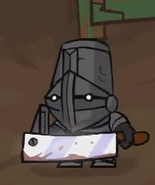 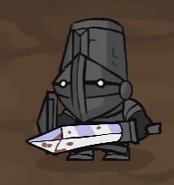 Stove Face's color affinity on a PS4 controller (it's a tad more pink than Conehead's).