Complete the game with Red Knight

50 (+0% DMG)
55 (-10% DMG) (Beginning of Marsh)
Skeleton is an enemy and also one of the 31 Playable Characters in the game Castle Crashers Remastered. His magical attacks are Non-Elemental and his starting weapon is the Skeletor Mace.

Skeletons first appear as resurrected enemies summoned by the Necromancer. These enemies include Brutes, Saracens, Coneheads, and Stove Faces, while also resurrecting Civilians, Peasants, and possibly, even fallen Gray Knights in Lava World. A lot of Skeletons are seen throughout Marsh attacking local Peasants and Civilians. Also during Marsh, the Necromancer and the Evil Wizard use their powers together, with Necromancer resurrecting the Skeletons and Evil Wizard turning 4 of them into Beefies.

Skeletons have a deep crack going down the right part of their frontal bones; they are mostly seen covered in dirt, likely because they emerged from the ground.

Skeletons that are encountered in Lava World have a chance of being summoned with Brute, Saracen, Civilian, Peasant, Conehead, or Stove Face armor save for the shield.

Dark energy bursts up from the ground in front of you. Each upgrade level adds another burst of darkness in front of the previous ones. It does full damage to all enemies based on defense.

Shoots a dark projectile that moves faster than normal.

Shoots a dark projectile that moves faster than normal. An advanced use of Juggling, named Spellweaving, can use this Air Projectile for flashy techniques.

Jumps with dark magic boost, and does damage to overlapped enemies. Skeleton and Cult Minion share the same Magic Jump.

Skeleton's "Dark Pillars" Splash Attack is a decent option for Juggling. It is not to be considered boss slayer material. Identical to Cult Minion and Barbarian. Average character.

Skeleton is incredibly easy to pick up and learn. His game plan is similar to Necromancer's except, the "Dark Pillars" Splash Attack has range. 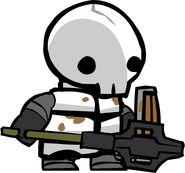 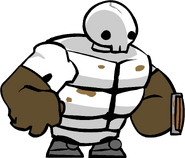 Skeletons being resurrected by Necromancer in Lava World.

Skeletons being resurrected and buffed by Necromancer and Evil Wizard.

Skeleton as a Brute. 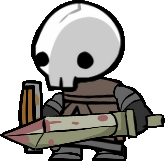 Skeleton as a Saracen