Saracens
Scratchpaw
Royal Guards
Sand Castle Interior is the twenty-fifth level in the game Castle Crashers. On Insane Mode, it is easy to mess up the Beefy juggle on the Beefy Saracen and die in two hits with no investment into Defense. The Saracens will also be annoying due to their speed and tendency to perform stray shots with their Bow and Arrows in the next wave.

You first have to face off against one Beefy enemy with one normal one. Try to jump straight into the air, just out of the Beefy one's reach and hit him with a few mid-air Light attacks. Magic and/or arrows are a viable strategy as well. Next, you'll be cornered by two more beefy Royal Guards and 6 regular ones. If you can get a smaller guy alone, try to quickly take him out. If not, work on the jump attack routine or use magic or arrows on the Beefys. Remember not to get too close to them as they will grab you right out of the air. Defeat them all and head up the stairs to the right. 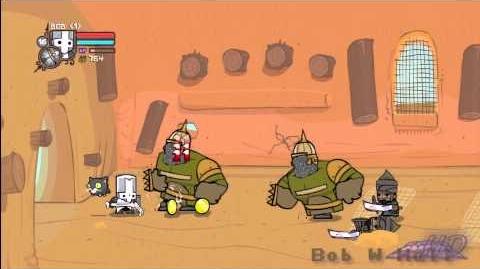 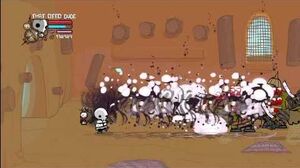