Levels
Red Knight is one of the 31 Playable Characters in the game Castle Crashers. Their magical attacks are Electricity and their starting weapon is the Mace.

Red Knight, befitting of his name, dons an red themed helm and tunic. He is usually portrayed as the most panicked out of the knights. When injured, he can be seen crying or closing his eyes, mouth open.

Red Knight is one of the King's Knights, to whom he serves with loyalty, helping to get the princesses back and defeating the Evil Wizard.

Max Hits: Depends on the amount of Magic and how long

is held for; maximum Infinite

to perform. A lightning bolt is held out in front of you for as long as the button is held. Takes normal Magic cost to start it, but then continues to drain Magic slowly for as long as it is held. Each upgrade adds to the range of the titular "Thunderbolt" Splash Attack, but not to the number of hits, which is affected by how long it can be held until Magic runs out.

Maximum potential ensures 24 hits before it runs out. This locks normal enemies in place while it is active and can affect as many enemies get in range. Although it does less damage per hit than is normal for Splash Attacks, it is unique in being able to hit regular enemies multiple times. This spell is very effective against bosses such as the Conehead Groom and Necromancer, as they can be held in place with it and shocked.

It is also effective in Multiplayer, as it is capable of aligning many enemies at once for safe juggles and combos. For complete utilization of this Splash Attack, the player should be aware that the enemies are briefly knocked down after the Splash Attack ends, allowing some time for the player to flee to a better position. Note that this Splash Attack does not acquire XP from bosses.

to perform. A small ball of electricity sparks along in a straight line. Since there is no effects, this is a fairly lackluster Magic Projectile compared to most.

to perform. A small ball of electricity sparks along in a straight line. Since there is no effects, this is a fairly lackluster Air Projectile compared to most.

to perform. A shocking blow of your sword stuns an enemy. The damage is much lower than the Armor Pierce Elemental Infusion attack.

to perform. Leaps up with an electrified boost, knocking over enemies caught in it. There are no special effects, but knockback on enemies is not based on weight group but elemental resistance instead.

Red Knight's element is Electricity, which has the ability to stun lesser enemies, while dealing constant damage at the same time. His "Thunderbolt" Splash Attack can stun several enemies at the same time, which makes it very efficient for crowd clearing. However, it is not as effective for finishing enemies. Red Knight will have slight trouble against bosses because they won't get stunned by the shocking effect, allowing them to close in on him very quickly, which will force Red Knight to resort to hit-and-run tactics.

Red Knight's "Thunderbolt" Splash Attack does not give Red Knight XP from bosses, so the Level 50 Combo,

, will suffice in most scenarios.

Red Knight is quite optimal for assassinating Beefys as they will get stunlocked instead of knocked down, allowing rapid damage output against them. However, one must be aware that Beefys can move in between each time they're damaged, usually with the heavyweight Beefys doing so effortlessly. To avoid unnecessary damage, the player should stop his attack before the heavyweight Beefy gets too close.

Red Knight is also one of the few characters that suffers the most when his Magic has been depleted, leaving him very vulnerable while he waits for his Magic to replenish to a decent amount and then be able to use it again to escape from a dangerous situation. However, even while using any Levitation combo he's still able to be caught by Beefys no matter how high you are in the air.

With all this in mind, Red Knight is admittedly an above average specialist that has a decent time with the bosses that make even the better characters struggle. His Unlock Path is nothing to write home about, normally.

Easiest Conehead Groom and Necromancer fights hands down, at maximum potential. Red Knight is to be attributed with Magic early on to make the most out of him. Because of his specialized play-style it is recommended to use a well rounded Magic heavy weapon that does not reduce Strength.

While Red Knight's "Thunderbolt" Splash Attack is active and ensnaring an enemy or more, and if playing with someone else, they can use that opportunity to set up an easy infinite, such as

If the Animal Orb Rammy attacks enemies trapped in Red Knight's "Thunderbolt" Splash Attack, they will be knocked free from the stunlock.

Unlike in Castle Crashers, Red Knight gets no saving graces. He is one of the weakest characters in Arena. His "Thunderbolt" Splash Attack is effectively cut short in range and time. 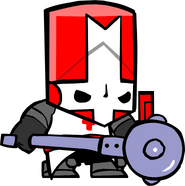 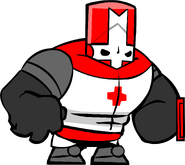 Skeleton, a playable character that can be unlocked by completing the game as Red Knight.

Orange Knight igniting the Corn Boss on fire with a nearby Red Knight blocking with his shield.