Knocks enemies down.
Hits enemies upon any sort of contact.

Tall Grass Field
Rammy is one of the 29 Animal Orbs a player can obtain in the game Castle Crashers.

Rammy is found in the Tall Grass Field level. To obtain him, the Bear Boss must be defeated first. Once the boss is defeated, Rammy will be available to pick up for you.

Rammy can be a very powerful pet in Arena Mode because of the following advantages. 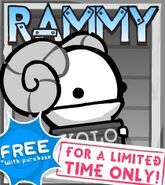 Rammy as he appears as a BattleBlock Theater head.

How to unlock Rammy.