Levels
Pink Knight is one of the 31 Playable Characters in the game Castle Crashers. Their magical attacks are Non-Elemental and their starting weapon is the NG Lollipop.

They feature Pink and white Knight-like armor/tunic, joyful eyes and face, pink heart on their chest (Which replaces a Cross/Plus-Sign), and lipstick kiss marks on the facial area. For some reason, unlike the other knights, it isn't as common for their face to change expressions.

Rainbow Chain is a splash attack that shoots 4 segments of a rainbow which cause enemies to perform a peace sign. It's unique not only because of the stunlock and rapid damage, but it's the only other normal style splash magic besides the "Saw Trap" Splash Attack (used by Fencer and Industrialist) that hits more than 7 times per cast. It also, just like Orange Knight's "Flame Burst" Splash Attack, has the longest range of all Splash Attacks in the game. Unlike Orange Knight, however, it's fully upgraded by the time only 15 points have been added to the magic stat (to the third highlighted bar). The cost of this spell increases as the magic stat increases, making it impossible to cast this spell more than twice per mana bar.

A Magic Projectile attack where the knight throws a chubby penguin or a pink weasel (as seen at the end of the game) in an arc type motion. Stuffed Animals can also perform Critical Strike.

An Air Projectile where the knight throws a chubby penguin or a pink weasel (as seen at the end of the game) in an arc type motion. Stuffed Animals can also Critical Strike. When used in the air, it falls at a 60° angle rather than a 45° angle like most other projectiles, which only makes it more effective, because it will hit enemies that stand close to you where you can't hit them with projectiles at Magic Jump height. With Air Projectiles, those enemies will be no big deal at all, and that makes Spellweaving very useful for doing Insane Mode alone without taking damage at all.

A Magic Jump where a pink weasel (as seen at the end of the game) comes up from the ground beneath the player and propels them into the air.

Pink Knight's incredibly easy to pick up and learn. His game plan is to take some advantage of stat distributing to Magic to take advantage of the "Rainbow Chain" Splash Attack's long range. 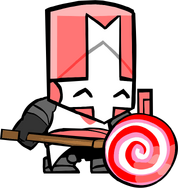 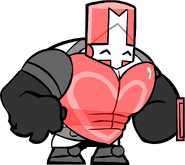 An example of Pink Knight's Magic.