Barracks
Home Castle (Barracks)
Lava World (Skeleton)
Dock
Pirate Ship
Marsh (Both as a Human and Skeleton)
Corn Boss
Final Battle (Barracks)
Peasant is one of the 31 Playable Characters in the game Castle Crashers. Their magical attacks are Non-Elemental and their starting weapon is the Wooden Spoon.

Peasants first appear playing instruments in Barracks where the player dances until being interrupted by the slain Gray Knight in the opening sequence. Outside the castle, a couple of Peasants are seen running away from Barbarians on the Home Castle level. Next, it is assumed that the Skeletons in Lava World are resurrected Peasants that Necromancer summoned to attack the player. Later on, a couple of Peasants are seen near The Sailor and Traveling Salesman at the Dock. On the Pirate Ship level, a Peasant is seen up in the crows nest using a Telescope, the same exact one that the player previously acquired from the Industrial Castle. On the Marsh level, multiple Peasants are seen dead while the remaining ones fight alongside the player after they've seen the player's courage in battle against Skeletons and Snakeys. Afterwards, a Peasant and a Civilian will watch the player fight the Corn Boss on the next level (note: you can get the peasant and civilian into the fight by standing beside them and waiting for the corn boss to pop up). Finally, after the player has killed the Evil Wizard in the Final Battle and sat through the end credits, some Peasants are seen playing instruments in the Barracks again.

Peasants seemingly respect King with loyalty, as they help the player(s) out in battle.

Arrows rain down from the sky to in front of the character in sets of three. Each upgrade level adds another set of three arrows. If maxed out and spammed, the Splash can stay out for a while, hitting any enemy or boss that comes towards it. Two things to watch for when using this Splash Attack is that the delay is moderately long for an enemy to slip past it unharmed on say the Scarabs in Desert and again, the delay is long enough for an enemy to get off a hit if you don't react in time. A total of 8 characters (including Peasant) share the same exact Splash Attack.

Peasant's respective "Arrow Rain" Splash Attack and "Dagger" Magic Projectile and Air Projectile make him a member of the fan nicknamed "Arrow Rainers". Bland and common characters that show off nothing special at all. These are considered to be the gold standard for Castle Crashers, as they are painfully below average and are not unique, unlike the characters below them. These are the aforementioned Peasant, Thief, Stove Face, Civilian, and Open-Faced Gray Knight. 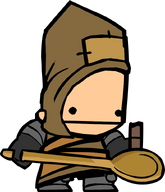 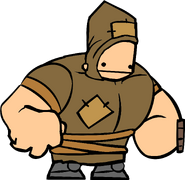 Civilian; a reskin of Peasant and a playable character that can be unlocked by completing the game as Peasant. 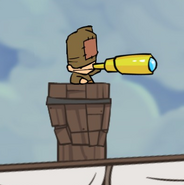 A Peasant in the cutscene of the Pirate Ship level.