Giant Troll
Coneheads
Cyclops
Thieves
Green Princess
Horses
Parade is the fourteenth level in the game Castle Crashers. Players should focus on hitting the Giant Troll in its eyes to avoid being knocked off by its laser beams. On Insane Mode, the bombs thrown by the Thieves do a hefty amount of damage and the Giant Troll takes a long time to kill.

You'll now ride along the top of the Conehead Groom's carriage. Stand on the right side and spam the heavy attack

to knock your foes off. Eventually, the Giant Troll will begin to chase you again. You need to keep hitting it in the eye with arrows or magic attacks to prevent it from blasting you with its laser beams. Just keep attacking it until it's been defeated, dispatching the occasional thief that will drop down. Enter the cave to the right to finish the level. You can also jump on the troll and damage him by juggling on him. Hawkster can do 6 damage to him rapidly, which may be a glitch.

Add a photo to this gallery

The Eye Beam shot from the Giant Troll.
Add a photo to this gallery 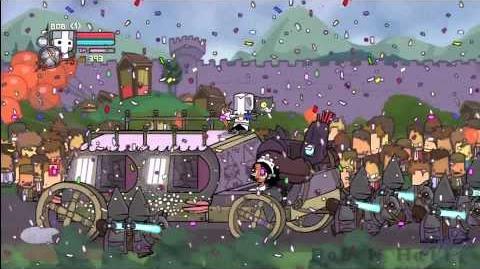 Retrieved from "https://castlecrashers.fandom.com/wiki/Parade?oldid=83007"
Community content is available under CC-BY-SA unless otherwise noted.