View source
watch 02:56
Raise a Floppa - The Loop
Do you like this video?
Play Sound

60 (-20% DMG)
The Painter is the first of the four final Bosses. Known to be one of the more bizarre enemies, very little is known about him other than that he works for the Evil Wizard. He is a tall humanoid figure wearing overalls smeared with paint, a toolbelt, gloves, a cap, and a toolbox for a head.

For the first phase, the Painter will drop down from an elevator, walk over to his canvas and create a painting, then walk back to the elevator and retreat back up. The painting(s) must be killed before the Painter will drop back down again. As the Painter's health lowers, the amount of paintings he creates per cycle will increase, to a max of 3 at once.

After the Painter's health goes below 40%, then the second phase will start next time he steps off the elevator. The Painter will run in random directions, changing direction at random intervals. Every time the Painter changes direction, a painting is summoned from a random side of the screen, which run in one direction and have only 1 health.

On death, all paintings will explode. After saying "It must have been something I ate...", the Painter will spit out 16 fruit (Health Potions on Insane Mode if players are missing any) before a Boss Chest drops onto him. If the Unicorn Painting is alive when the Painter dies, it will drop the Unicorn Horn weapon. Afterward, the player can go to the next room to destroy a giant purple crystal, which will unlock the next boss.

The Painter, instead of attacking the player directly, paints various dangerous cartoonish creatures on his painting frame. Every painting will slowly approach the closest player, and on contact will explode, dealing massive damage.

The Painter, as seen in the Wizard Castle Takeoff, holding the Orange Princess 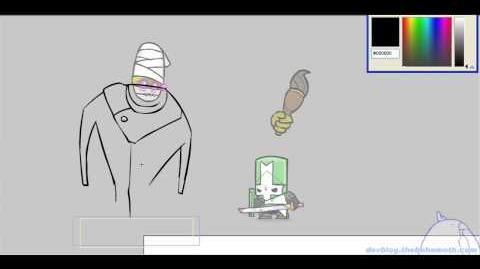