N/A
Open-Faced Gray Knight is one of the 31 Playable Characters in the game Castle Crashers. Their magical attacks are Non-Elemental and their starting weapon is the Skinny Sword.

A unique variation of Gray Knight that does not appear in Story Mode normally.

Arrows rain down from the sky to in front of the character in sets of three. Each upgrade level adds another set of three arrows. If maxed out and spammed, the Splash can stay out for a while, hitting any enemy or boss that comes towards it. Two things to watch for when using this Splash Attack is that the delay is moderately long for an enemy to slip past it unharmed on say the Scarabs in Desert and again, the delay is long enough for an enemy to get off a hit if you don't react in time. A total of 8 characters (including Open-Faced Gray Knight) share the same exact Splash Attack.

Open-Faced Gray Knight's respective "Arrow Rain" Splash Attack and "Dagger" Magic Projectile and Air Projectile make him a member of the fan nicknamed "Arrow Rainers". Bland and common characters that show off nothing special at all. They are painfully below average, and are not unique, unlike the characters below them. These are the aforementioned Open-Faced Gray Knight, Thief, Stove Face, Peasant, and Civilian. 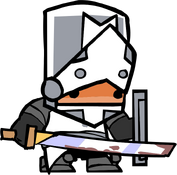 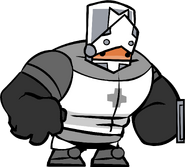