Complete the game with Fire Demon

55 (-10% DMG)
Ninja is an enemy and also one of the 31 Playable Characters in the game Castle Crashers. Their magical attacks are Non-Elemental and their starting weapon is the Sai.

The player(s) first encounter several Ninjas boarding the player's/players' ship in the Pirate Ship level, making their debut. Their ship will fire cannon balls (which are Bombs) from a 50 feet far distance, and sometimes they will get 35 feet closer, in which a lot of Ninjas will begin hopping out of their ships and entering into yours, starting a battle. The ship can't be attacked when it is firing cannon balls; The only you should do is attack the Ninjas and survive. Dealing with all of them will cause the Ninja's ship's left part to sink into the ocean, with a lot of Ninjas climbing the unsinked part of the Ship, trying to prevent them all from perishing. However, their ship manages to surface as some Ninjas are seen still alive. Next, the Ninja isn't seen again until the Wizard Castle Interior through the Necromancer's Room level where the Necromancer resurrects only one to fight the player(s). Finally, the Ninjas reappear again in the End Credits as they still are stuck in the same predicament that the player(s) left them in: surfaced and stranded on a broken nearly sinked ship. Some Ninjas are seen floating in the ocean's waters, presumably dead.

It is possible that the Ninjas are not serving under anyone's rule besides themselves bar the one Ninja found in the Necromancer's Room.

The Ninja is a ninja pirate hybrid that is majority Ninja as his Splash Attack, Magic Projectile, Air Projectile, and Magic Jump Magic attacks and Flying Kick and Log Replacement techniques prove this.

The Ninja is clad in a typical shinobi shōzoku that is colored dark blue. The tunic is also part of the shinobi shōzoku. As for the pirate part, the characteristics are more subtle. His shield is a cup of ale, which pirates frequently drank. He also has a skull-and-crossbones insignia on his dark headband, which resembles the Jolly Roger flag traditionally used to identify pirate ships like his own. The Ninja has white dots for eyes which can be regularly seen when performing a light attack on a Ninja or getting hurt as the playable Ninja.

to perform. A puff of purple smoke appears in front of you, knocking enemies over. Each upgrade adds another puff in front of the previous ones, up to a total of 7. A common misunderstanding is that this spell has much less range than most other Splash Attacks; however, the range is actually longer than what is shown, and can best be described as adding another puff at the end of the last visible one. The spell also triggers a special sound when used where Ninja vocally speaks with Chinese-like chimes playing afterwards. This Splash Attack is very rapidly damaging and has a good Beefy knockdown ratio.

Because of this, even though the speed is less than that of those characters, the mechanics make it more economical because more shorter range/smaller hitboxes = hits per cast = more damage (as well as more XP) per cast = higher DPS = more effective boss slaying (as well as farming because of the XP but not as good for expectations).

to perform. A spinning shuriken used as a Magic Projectile. Ninja makes a grunt sound effect on cast.

to perform. A spinning shuriken used as a Air Projectile. Ninja makes a grunt sound effect on cast.

to perform. Jumps with a purple cloud effect that damages overlapped enemies. Ninja vocally speaks when doing this, too.

Ninja is a decent boss slayer with a good Beefy hitting ratio with his "Smoke Screen" Splash Attack. Hitting the Beefy up to knock down. There is a case for Ninja to be a decent intermediate friendly character with the greatest Unlock Path, unlike Fencer.

Capitalize on Magic as soon as possible. Weapon choice almost doesn't make a difference due to how fair the "Smoke Screen" Splash Attack is. Ninja, as well as any boss slayer in the game, bar Fire Demon and Red Knight, truly only struggles against massive amounts of enemies or a very quick heavyweight such as in Thieves' Forest and Wizard Castle Interior and Conehead Groom, respectively. Especially if the Ninja player can not utilize Juggling at all to save his/her life.

Late game, Ninja is above average. Recommended to use a Strength heavy weapon or a Magic heavy weapon that does not reduce Strength. Animal Orb selection does make a bit of difference. The top 5 Animal Orbs in Snoot, Burly Bear, Hawkster, Piggy, and BiPolar Bear will suffice. 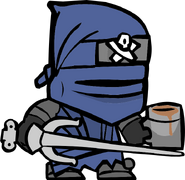 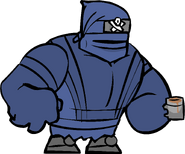 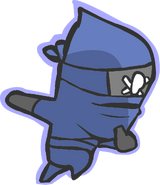 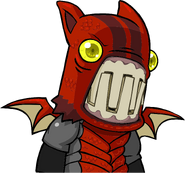 Fire Demon; the character used to unlock Ninja after completing the game.