50 (+0% DMG)
Necromancer is the penultimate boss of Castle Crashers and one of the 31 Playable Characters. His magical attacks are Non-Elemental and his starting weapon is the Evil Sword.

Upon defeat, he will fly up into the air out of sight. Shortly after, he will drop his weapon, the Evil Sword. The player can then exit the room to destroy another large purple crystal, and be able to progress to the final boss: the Evil Wizard in the Final Battle level.

Remember to keep some Health Potions handy as this is the hardest boss fight in the game, due to its sheer number of enemies. Necromancer flies out of the player's attack range at the beginning and revives two waves of dead warriors that must be defeated before engaging him in battle.

Animal Orbs to use

This is the easier of the two waves of enemies as there are 5 lightweights, 1 heavyweight, and 1 mediumweight. The lightweights will be the easiest to dispose of so It's a good Idea to target them first. Basic juggling skills are all you need to survive this fight.

Make sure to get a running start before the second wave begins.

This is the harder of the two waves by far due to the fact that there's 4 lightweights, 2 mediumweights, 2 heavyweights, and 3 Beefy enemies. Skilled juggling is required to beat this wave for most players. It can be time consuming, but learning how to juggle well will pay huge dividends in the future.

Beefy Brute can not be juggled, so once he's the only one left, kill him by spamming arrows/magic. Avoid hitting the beefy enemies before getting ready to kill them, as this will make them flinch and give them the ability to grab the player out of the air.

Once engaging Necromancer in battle, his main attack will consist of hitting the player with his sword up close, or creating a wave of magic to hit them from a distance. He will occasionally launch a skeleton at the player. In addition to these attacks, he will frequently use the "perfect block" technique. This allows a player to knock the opponent backwards and deal 1 damage by timing their block perfectly.

The fastest and easiest way to kill the Necromancer is to intercept him as he's flying down from the ceiling and begin a lightweight juggle. Provided the player doesn't mess up the combo, he will be unable to retaliate before dying.

If the player misses the timing for the juggle, the second easiest way to kill him is to throw him upwards and use

to juggle him depending on the force of the uppercut.

to perform. The titular skeletal hands pop out of the ground in front of the player, doing 1 hit. Each upgrade adds an extra hand segment, up to 8 segments. It is worth nothing that the visual effects for the splash stay out much longer than the actual hitboxes do.

This splash attack is very useful for starting juggles on non-heavyweight enemies. The startup for the splash is very quick, and the duration of the entire splash attack is average, so most of the time, there is ample time to catch up to the hit enemy to start a juggle.

One final note is that when the splash is spammed, every hit stacks on top of each other. This doesn't affect anything other than allowing the Fishmen to be stunlocked by the splash when positioned correctly.

. Sends a Skeleton running across the screen in a straight line. Explodes on contact with enemies or with the edge of the screen.

The fastest Magic Projectile in the game.

to perform. Sends a Skeleton running across the screen in a straight line. Explodes on contact with enemies or with the edge of the screen. When this move is used in the air as an Air Projectile, unlike most Air Projectiles, the "Kamikaze Skeleton" Air Projectile continues to go through the air for a bit and then run rather than ending as soon as it comes in contact with the ground.

In Necromancer's case, the Air Projectile moves slower horizontally than the Magic Projectile.

An advanced use of Juggling, called Spellweaving, can use this Air Projectile for flashy techniques.

Necromancer's "Skeletal Hands" Splash Attack is a decent setup option for Juggling. It is not to be considered boss slayer material. Necromancer's "Kamikaze Skeleton" Air Projectile is best known for being the only Air Projectile to keep on going, even when impacting with the ground. The projectile also moves very fast. Due to his otherwise average splash having such an unconventional purpose, he is arguably one of the harder characters to learn.

At the most extreme, the player would not need to commit to Magic in order to utilize Necromancer's bare bones "Skeletal Hands" Splash Attack. The splash sets up juggles fine with only one segment. As such, late game, Necromancer does not gain much development. The primary advantage of upgrading magic is gain the "Kamikaze Skeleton" attack as a solid air option.

The "Skeletal Hands" Splash Attack can help lead to a mediumweight juggle. This makes Necromancer very powerful for starting combos from the neutral game. 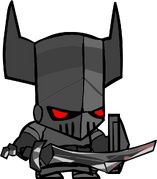 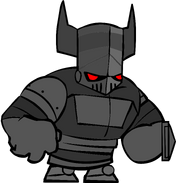 Necromancer as he appears in the game with wings.

Necromancer, along with the Evil Wizard, resurrect and buff Skeletons in Marsh. The Sixth skeleton is seen dancing.

The Necromancer as he appears in the XBLA exclusive Necromantic Pack DLC.