Peasants
Skeletons
Frogglet
Necromancer
Evil Wizard
Snakeys
Imp
Trolls
Troll Mother
Civilians
Snailburt
Marsh is the twenty-seventh level in the game Castle Crashers. This level is one of the most challenging levels in Insane Mode; along with Lava World, Desert, Full Moon, and Wizard Castle Interior. It is also potentially one of the most time-consuming levels in the entire game, along with Full Moon, due to the massive amounts of enemies fought in this singular level alone.

You first need to stop by the Flooded Temple and go to the Marsh level immediately afterwards as it instantly unlocks after you've entered the aforementioned Flooded Temple.

Quickly run to the right and knock the Skeleton off the dead Peasant and start to fight 5 Skeletons. 2 Peasants will watch your bravery and aid you in your battle.

Continue to the right; fight the 4 Skeletons that are alerted by a crow.

Moving along, your 2 same Peasants that aided you will run right through the encounters of both the Necromancer and Evil Wizard once again. 8 Skeletons will rise from their gravestones with help from the Necromancer and 4 will be turned into Beefy Skeletons with help from the Evil Wizard. Don't be afraid to use a Sandwich if you have one to combat these foes, unless you're playing on Insane Mode, in which using a Sandwich is a terrible idea.

After the Beefy Skeletons Fight, make your way to the right where you will face off against 3 sets of 3 Snakeys ready to fight the player(s).

Continue on your way through, and the 4th set will instead hold 4 Snakeys that drop from the decayed looking castle wall. These 4 Snakeys will be paired up with the Troll Mother and her Trolls; Be sure to take out the Troll Mother when it appears as it will spawn Trolls infinitely until it's killed.

After the time consuming fight with the aforementioned Troll Mother, you'll fight another set of 4 Snakeys, this time however, a Peasant will aid you in fending off against the Snakeys.

Afterwards, that same Peasant will run through a cutscene where there's 1 Peasant and 2 Civilians fighting again, another set of 4 Snakeys. You will also see a pet just waiting out in the open seemingly for you, just don't forget to touch it in order to unlock it.

Finally, you'll fight your final set of 4 Snakeys, with assistance provided by the aforementioned Peasant and the 2 Civilians. After your last set of 4 Snakeys, move towards the massive grouped corn stalks and into the next level. .

Now there isn't really much to talk about this fight on Normal Mode, aside from the expected damage output that the Skeletons do, but on Insane Mode this fight is challenging and is one of the most hardest parts of the game. Beefy Skeletons can kill you in 3-4 hits, most of the devastating attacks come from a deadly combo of punching and throwing, doing a good 600+ damage per combo.

There are many ways to go about this fight:

1. Play aggressively towards killing the first, quick lead Beefy Skeleton. This will lead to the other Beefy Skeletons turning into assist and support characters. You can do this by using the Beefy Juggle.
2. Splash Attack spam efficiently.
3. Use Health Potions sparingly. It may seen like you're nearing death after getting hit twice by a Beefy Skeleton, but you should really only heal when you see your character get pulled from out of the air by a Beefy Skeleton.
4. Arrow spam. This is a slower method involving the exploitation of the Beefys getting stuck on a wall. You really have to only look out for 2 things: the lead Beefy Skeleton coming towards you and the assist and support regular Skeletons using their Magic Projectile, Magic Jump, Air Projectile, and Splash Attack.
5. Play aggressively towards killing all 4 Beefy Skeletons. You die fast, you kill them faster in return. 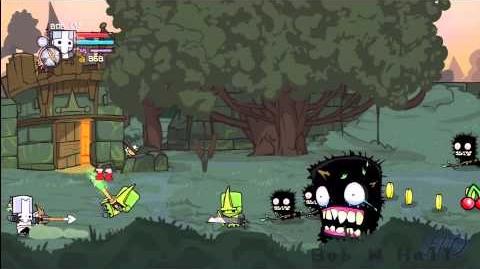 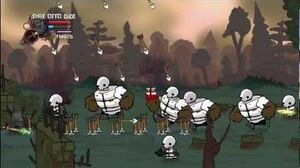 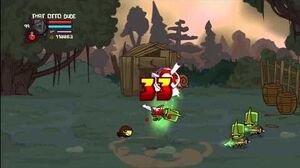 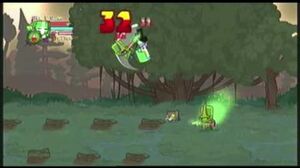 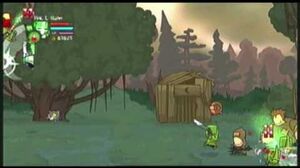