The Knights are the loyal fighting troops that serve the King. There are four high knights, which are the King's most trusted warriors. They are the Green Knight, the Red Knight, the Blue Knight and the Orange Knight. However, these are not the only knights in the kingdom, as the main bulk of his army is composed of lesser knights, known as the Grey Knights.

There are two other high knights who will only reveal themselves when the situation becomes critical and the stability of the kingdom is in danger. One of them is the Blacksmith, a veteran knight who has left the battlefield to continue his life in peace working as a blacksmith, but who will not doubt in donning his armor again if the situation requires it. The other one is the Pink Knight, a joyful warrior. All of the King's knights wear armor inspired by what was worn by Crusaders, as they all bear a cross, save for the Pink Knight, who wears a heart instead.

The game also includes an array of Stove Faces (also known as the "Black Knights"); who can be unlocked as one of the 31 playable characters by completing the game with the Gray Knight. The Stove Faces, however, are not loyal to the King, but to the Evil Wizard. They only appear in the Full Moon. 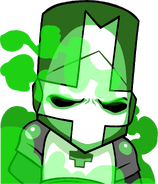 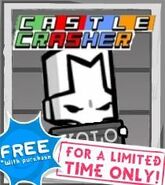 The Green Knight uses Poison magic. If any of his magic hits, the magic will deal damage and poison any character in the game (except for large characters).

The Red Knight uses Electric magic, and his Splash Attack holds an enemy in place and deals continual damage as long as you hold the attack.

The Blue Knight uses Ice magic, and his Splash Attack can only be used twice in a full mana bar, instead of decreasing in cost as you add levels into it. His magic freezes anybody it hits (except for large characters).

The Orange Knight uses Fire magic, and his fire attacks cause some damage over time. His Splash Attack is also one of the longest ranged of any character.

The Gray Knight is the bulk of the King's army. He uses Non-elemental magic. His Splash Attack is a volley of arrows that increases as the magic is increased. His long ranged attack is just a bomb that bounces 1 time and can substitute a store bought bomb to find items.

The Open Faced Gray Knight is the gray knight with his visor open. He uses Non-elemental magic. His Splash Attack is Arrow Rain. His projectile is a dagger, instead of bombs, that has unlimited range.

The Blacksmith uses Non-elemental magic based around weaponry and smithing. His Splash Attack summons the Weapons Frog, which thrusts its tongue forward to strike an enemy. His Projectile Attack throws a burning hammer that can cause fire damage to the enemy for one second.

The Pink Knight uses Love magic. The Pink Knight's Splash Attack is a chain of rainbows, growing by 1 rainbow per magic level. It causes the enemy to temporarily freeze upon being hit.

Also known as a Stove Face, These are the only Knight-related characters that do not serves the King and are enemies. These uses Non-Elemental magic. Their Splash Attack summons a Arrow Rain, and they use Knives as Air Projectile. They're called ''Stove Faces'' because they have a helm and armor similiar to a stove.

The Hot Pink Knight was a Cut Knight from the game Castle Crashers(R). This Knight was to use Perfume magic, and was to be in a special DLC. This knight splash attack was a perfume spray, and the projectiles are Gas Shots. He could also make pink portals(And use it as special jump technique). He/she was removed because he/she were to similiar to the Red and Pink Knight, and could be confused with them, or maybe because that was a stupid idea. Its unknown his/her gender.