Home Castle
Catfish
Tall Grass Field
Pipistrello's Cave
Flowery Field
Final Battle (Barracks)
King is an ally and also one of the 31 Playable Characters in the game Castle Crashers Remastered. His magical attacks are Non-Elemental and his starting weapon is the King's Mace.

The King first appears in the Home Castle. The King is first seen shivering in fear as the Evil Wizard approaches closer to the King, only to steal the crystal and spare the King. Next, the King reappears in Catfish, armed with a loaded boat that can help aid the player(s) by visual cues and stunning Catfish. Afterwards, in Tall Grass Field, the King is seen pacing back and forth on land, possibly planning a push. In Pipistrello's Cave, after Pipistrello is no longer considered a threat, the King, along with several Gray Knights, push even further to initiate the siege in Flowery Field to aid the player(s) in rescuing the Green Princess from the Conehead Groom. Finally, the King reappears after the Evil Wizard has been defeated and rewards the player(s) in kissing the Orange Princess, before leaving, in the Final Battle sub-level, dubbed Barracks.

The King is the supposed caretaker and / or father of the four Princesses, as well as the founder of the Home Castle, and keeper of the crystal.

Being a man of such great rule, the King has several distinct features. Thick white eyebrows, a grown white beard, a modified crown to suit his monarchic appearance, and puffy clothing with dots, according to his character portrait. The King appears throughout the game in "speech bubbles" pertaining to what new item or combo the player has got or learned via level up or attributing points into Magic enough for a threshold, respectively. He also appears to be elderly.

Max Hits: 1 for each player.

Magical cloud shaped balls surround the King from the back as they heal him and the party. The party members must be near the King to receive healing. It is not recommended to heal while attacking a large group of enemies. You'll get hit and lose more health than you gain every time.

Throws a golden knife. An advanced use of Juggling, named Spellweaving, can use this Air Projectile for flashy techniques.

A puffy white cloud appears under the King as he jumps. Can be used to start up juggles or levitation combos.

King's distinct trait over the other available 30 characters is that he has no offensive Splash Attack. Instead he trades offense with supportive magic. Healing from the Splash Attack isn't as good as one might think it would be. The healing is dependent on the level that the King player is at, the points attributed to Magic, and the weapon that the King uses. This makes King stuck with the tools he has remaining. Highly dependent on juggling and taking a break between each fight in a regular level such as Desert and Full Moon just to heal. King is one of the worst characters in the game, alongside Green Knight. No Splash Attack to defend himself with at all.

King has a miserable time alone in several levels. Arguably has the most the difficult Desert bar no stat runs. Different time in multiplayer, where his unique Splash Attack shines. Recommended to attribute Strength first, then Magic, without balancing stat attributions. This is to maximize King's base healing potential without using an Animal Orb like Beholder or a Magic heavy weapon.

King's misfortune applies heavily here, too. The less than or equal to derivative of the "Arrow Rainers" Thief, Peasant, Civilian, Open-Faced Gray Knight, and Stove Face, when played to his best potential. 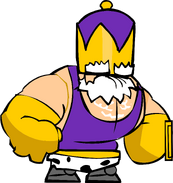