Complete the game with Barbarian

Killer Beekeeper is an enemy and also one of the 31 Playable Characters in the game, Castle Crashers. His magical attacks are Non-Elemental and his starting weapon is the Rat Beating Bat.

Throughout the game, only two Killer Beekeepers are seen during the Flowery Field level. They fight alongside the third group of Bees the heroes encounter.

Not much is known of their story or involvement in the storyline but it is presumed that they are enemies of King and his knights. It is also possible that the Killer Beekeepers simply don't like people on their bee farm, and are just trying to chase away any intruders.

Killer Beekeeper's appearance is that of a typical beekeeper. Particularly, one who wears a hat veil mainly tailored to protect from bee stings to the face and neck.

Summons a bee that drops straight down from the sky, stinger first, until it hits an enemy or the ground, at which point it dies and bounces off the ground a couple of times before blinking out. Each upgrade level adds another bee that drops just in front of the previous ones.

This is the only splash attack that deals normal damage to targets in the air.

Because the bees fall straight down instead from the sides similar to "Arrow Rain" or "Weapon Rain", it is easier to hit many bosses with all of the bees compared to those spells, making this one of the best Splash Attacks for hitting airborne enemies. However, because each bee dies as soon as it hits something, each bee can only hit one target, whereas in most Splash Attacks each hit of the spell can actually hit multiple enemies. Thus it is limited to hitting 7 enemies at most, whereas other Splash Attacks have no upper limit to how many enemies they can hit (just how many hits they can do to a single enemy).

If a boss is next to or floating next to a wall (e.g.: the last boss in his floating spider form) and you use Killer Beekeeper's splash attack next to or under the boss, the bees will come down in a straight line, ensuring every bee is dealing a hit and causing tons of damage. It works well if whomever the boss is chasing holds up their shield next to a wall while the designated Killer Beekeeper splashes away.

Shoots a bee diagonally, stinger-first. An advanced use of Juggling, named Spellweaving, can use this Air Projectile for flashy techniques.

Jump with a purple steam cloud and steam sound effect that damages enemies. This is similar to the jumps of the Industrialist and the Fencer.

Arguably the most fragile boss slayer in the game. It does not help that Killer Beekeeper has the most uncommon unlock path and character selection to most casual players due to them not committing time to complete Barbarian or getting what niche the Killer Beekeeper has.

Killer Beekeeper has a decent time alone on several levels. The unique trait only shared by Killer Beekeeper is to hit airborne bosses, most notably Dragon and Sock Puppet, Alien Ships, and hitting Medusa with her snakes mid-summoning.

One of the weakest characters in Arena Mode. Still, better than King and Green Knight. 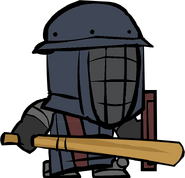 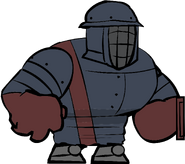 Killer Beekeeper's Color Affinity on a PS4 controller (it's a bit dimmer than Gray Knight's/Skeleton's).
Add a photo to this gallery

Retrieved from "https://castlecrashers.fandom.com/wiki/Killer_Beekeeper?oldid=87703"
Community content is available under CC-BY-SA unless otherwise noted.