The Insane Store is a store in the game Castle Crashers exclusive to the PS3, PS4, PC, Xbox One, and Switch versions, unlocked after completing the Final Battle level, along with Insane Mode.

The Insane Store is accessed by unlocking Insane Mode, going to the Barbarian Boss on the map and going down (or alternatively, going down from the home castle level).

The Insane Store is the largest store in the game, selling as many items as the Snow Store and being physically larger than any other store. This store is unique in its lack of consumable items and the expensiveness of its wares. The store sells three weapons and two animal orbs.

The Insane Store sells five items, however it could sell up to six if playing on the Xbox One, or Switch version of the game: 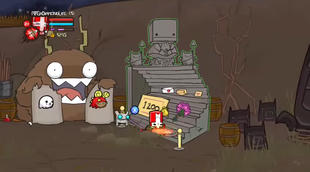 Wide view of the Insane Store