Fencers
Industrialists
Brute
Cardinal
Industrial Prince
Orange Princess
Industrial Machine
The Industrial Castle is the nineteenth level in the game Castle Crashers. On Insane Mode, this level can be somewhat challenging due to the amount of damage a player can take from the enemies.

Enter the castle, you need to use a Sandwich to become a Beefy and break down the door. A sandwich can be obtained in Lava World or purchased from the Volcano Store. Use the sandwich to become "Beefy", then rip off the metal door by repeatedly tapping

. You can come to the castle early but, without a sandwich, the Industrial Prince will stand on an above balcony and mock you. Likewise in Insane Mode.

Once inside, you will meet two waves of Fencers and Industrialists. Then you will encounter three mechanical obstacles in immediate succession. The first obstacle is a row of cannons incessantly firing acid balls at you. Your safest bet is to block these projectiles with your shield (

) as you slowly advance forward; however, you can jump over these projectiles with a little practice to save some time. Proceed up the ramp and you will come to the second obstacle which is a narrow path with large weights on chains that rhythmically rise and fall in an attempt to smash you. Timing through this is fairly easy: quickly step underneath the next weight as it rises, and repeat. You won't get caught under the previous weight if you always move at your first opportunity. The third obstacle is a row of electric barriers that rhythmically flicker on and off. (You can use a Sandwich to get through here quickly.)You have room between each barrier to stand safely, so take your time advancing through each barrier one at a time.

After passing the mechanical obstacles, you are drawn onto a moving elevator. You will be confronted with 12 total Fencers while the elevator continues to rise. Once you defeat all of them, the elevator will come to a halt and you can continue forward.

A heavyweight Beefy in Brute that possesses an Animal Orb, the Cardinal. Defeat him to claim his Cardinal. The two boxes in that area have a fruit and a drumstick.

If you did not decide to immediately kill the last two Fencers in the elevator via lightweight juggling the rest, then pull them along with the Fencers and Industrialists.

Finally, you'll meet the Industrial Machine boss. Stay on the dark gray floor in the center, as the red areas to the right and left will burn you. You will be confronted with two mechanical weapons at first.

Five posts will rise out of the center floor (one at a time in this order: top left, top right, bottom left, bottom right, center). The four corner posts shoot electric projectiles, fanning over a wide angle; the center post sends a shock throughout the entire floor surface when the meter charges up. Hack away at the posts while they rise until each one is destroyed.

The hand does not come out until after the second post recedes back. It attempts finger-walking directly at you, and will usually send you flying right over the red areas, where you'll take fire based damage over time, and will probably knock you down, allowing your character to be attacked again if he doesn't move quickly while standing up.
Hitting the hand causes it to jump away from you. To avoid being hit choose ranged attacks. Be aware that some attacks (like the Red Knight's splash attack) won't push the hand back and eventually it will hit you. Shoot arrows and projectile attacks to keep it at bay.

A gun periodically lowers on the right side and pans up and down the playing field, firing projectiles at various intervals. The type of projectile changes upon each appearance of the gun, chosen from among three elements: Fire, Ice, and Poison.

It's probably best to take out the electric posts first. After that, it's your choice whether you tackle the hand or the elemental gun first. The gun is pretty easy to anticipate and avoid, so you may opt to destroy the hand first.

Once the Industrial Machine is destroyed, the Industrial Prince will try to flee, but the Evil Wizard will take the Orange Princess with him and leave the Industrial Prince behind. You can now proceed to the right (the dangerous areas on the sides are now inactive). Grab the telescope to end the level. Before you grab it, you may want to bring Cardinal (or go back for him, if you didn't bring him to the fight) and walk through the back room of the balcony. He will fetch you the Pointy Sword. Knocking the Industrial Prince off of the castle doesn't have any other purpose other than for humorous reasons. 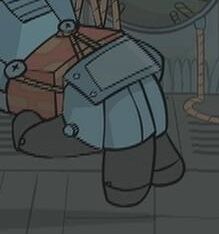 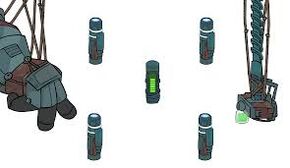