50 (+0% DMG)
Iceskimo is an enemy and also one of the 31 Playable Characters in the game Castle Crashers. His magical attacks are Ice and Non-Elemental and his starting weapon is the Fishing Spear.

Iceskimos makes their debut after the player has traversed deep into Full Moon after killing multiple Stove Faces in the level, slowly replacing them. Many Iceskimos are seen heavily fortified in their snow piles and icicle towers in Snow World, where they spam snowballs, which can be a minor annoyance. Right after, 3 Iceskimos are seen working with Frost King to prevent the player(s) from rescuing the Blue Princess in Ice Castle. Finally, an Iceskimo is resurrected by the Necromancer in his room in Wizard Castle Interior to fight the player.

Iceskimos serves the Frost King, as they try to fend off the player from reaching him and rescuing the Blue princess in three levels.

The Iceskimo wears a hood resembling the Thief, despite the lack of a real connection between the two. Icekismos takes the appearance of human figures with a blueish hoodie. Their hoods are all pointing up, and also covers their entire head. Also, what was to be their face is fully deepened (the hood), with some visible deep marks/lines, possibly for them to breathe, see, use their scent, etc. Or just to not show what their face looks like. Icekismos features fur on their hoods (in the back) and torso clothes, dark gray sleeve garters and leg wearing, normal gray pauldrons on the arms, and Shoes possibly made out of metal. Their torso and hoods have a color similiar to bright sky blue, while the front and bottom sideviews have are more likely light blue.

Their Beefy versions features a different type of hoodie without fur, as well as a belt. Their arms that were a dark gray color, were also replaced with a rosy finch color.

They hold a Shield fully made out of Ice; and they contain a spike on their front.

Iceskimos are one of the main antagonists of Back Off Barbarian, along with Fire Demons and Barbarians.

to perform. At max level, the "Ice Shards" Splash Attack has no gaps in their landing location. With each shard being able to freeze normal enemies, this Splash Attack can be very useful with a full team of 4 being able to Juggle freely without taking any damage.

Unfortunately, it has a major downside. Unlike all other Splash Attacks, its Magic cost actually goes up each upgrade level, such that you will never be able to cast more than two times in a single full Magic bar. Thus, it drains Magic desired for other Splash Attacks and cannot be used as often.

This Splash Attack will never hit enemies that are already frozen.

to perform. Throws a snowball as a Magic Projectile.

to perform. Throws a snowball as a Air Projectile.

to perform. This is considered the best Elemental Infusion in the game, because it can be used infinitely on an enemy.

When performed, the attack will freeze the enemy. This allows for the

to be repeated infinitely without the enemy having any chance to retaliate. The Ice effect does not reset the hit counter. Because of how the combo can be repeated, using the drill combo (

) is not optimal or needed.

Weapons with elemental effects may cause the enemy to break out of the freeze, allowing the enemy to retaliate, so it is worth keeping in mind not to use those weapons, especially on levels like Full Moon.

to perform. Leaps up with a cloud of cold mist with, strangely, a metal impact-like sound that damages overlapped enemies. Could make Iceskimo better than Blue Knight.

Iceskimo's Splash Attack, "Ice Shards" is useful to immobilize groups of enemies immediately, dealing a good amount of damage. Iceskimo's Elemental Infusion, "Ice Encasement" is great for infinitely combo locking an enemy until the enemy gets beheaded if done correctly.

The only main downside to Iceskimo is that his "Ice Shards" Splash Attack is expensive, only allowing 2 consecutive spells before needing to recharge fully to do again.

Typically, a Iceskimo player tends to capitalize Magic at some point in time, due to how incredibly potent it is in said certain roles. After the hurdles of stat attributing subside, Iceskimo becomes a methodical killing machine that faces little to no problems in the game.

The differences between Blue Knight and Iceskimo actually do matter. Thus, Iceskimo is punished for being a mixed character of Ice and Non-Elemental Magic. Leaving him just under Blue Knight in terms of prowess. Still, Iceskimo is one of the best characters in the game.

Pretty good character in Castle Crashers. Capitalize on Elemental Infusion, at the minimum or maximize Agility first. Then, commit to maximizing Strength due to his downside. Recommended to use a Strength heavy weapon or a Magic heavy weapon that does not reduce Strength. Animal Orb selection does make a bit of difference. The top 5 Animal Orbs in Snoot, Burly Bear, Hawkster, Piggy, and BiPolar Bear will suffice.

Late game, Iceskimo lives up to his reputation. While boss fights may take longer to get through, boss slaying is not what makes or breaks a character, warranting Iceskimo's position in tier lists.

The best starting weapon character along with Bear.

Iceskimo is one the best characters in Arena. His "Ice Shards" Splash Attack is useful for mediumweight juggling, as well as controlling neutral. 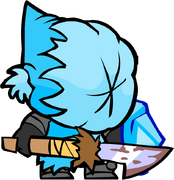 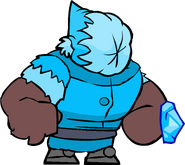 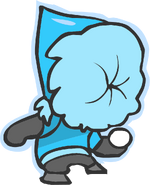 Back Off Barbarian antagonist and sprite.

Blue Knight; the only other character in the game that uses Ice Magic.

Thief; a character that looks very similar to Iceskimo.

Brute; the character that Iceskimo unlocks after completing the game. 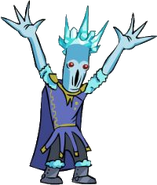 Frost King; who the Iceskimos serve.