Tears of a Pansy

1200 gold
Hatty Hattington is one of the 31 Playable Characters in the game Castle Crashers. Their magical attacks are Non-Elemental and their starting weapon is the Emerald Sword.

His Magic contains references to the same game.

Recently discovered to not live up to his reputation as arguably the worst character in the game, in Castle Crashers, Hatty Hattington can carry a player even in Insane Mode. His worst aspects remain the same, his Splash Attack and Magic Projectile.

Hatty Hattington actually has a decent time alone in several levels. Maximizing Magic to reach his Air Projectile is recommended once Spellweaving is learned.

One of the weakest characters in Arena. The less than or equal to derivative of the "Arrow Rainers" Thief, Peasant, Civilian, Open-Faced Gray Knight, and Stove Face when played to his best potential. 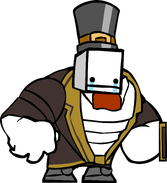