Levels
Green Knight is one of the 31 Playable Characters in the game Castle Crashers. Their magical attacks are Poison and their starting weapon is the Thin Sword.

Green Knight, befitting of his name, dons a green themed helm and tunic. He is usually portrayed as the most angry looking out of the knights. When injured, he can be seen crying or closing his eyes, mouth open.

Green Knight is one of the King's Knights, to whom he serves with loyalty, helping to get the princesses back and defeating the Evil Wizard.

to perform. A poisonous cloud pillows forth, knocking over any enemies it hits and poisons them. The Poison Damage over Time effect is inconsistent because of how many enemies that resist the Poison element. Each upgrade level adds to the range and to how many max hits the spell can inflict on an enemy that is not knocked over by it. This spell's collision is a bit odd in that it can go through a decent amount past terrain obstacles such as walls, pits, and the line of the Volleyball Game, albeit it won't fully go past the line unlike Industrialist and Fencer's Splash Attacks, which fully can.

to perform. A ball of Poison. The Poison Damage over Time effect is inconsistent because of how many enemies that resist the Poison element.

to perform. A ball of poison. The Poison Damage over Time effect is inconsistent because of how many enemies that resist the Poison element.

to perform. A blast of poison drenches enemies. The Poison Damage over Time effect is inconsistent because of how many enemies that resist the Poison element.

to perform. Leaps up with poison billowing out below, poisoning any enemies near the initial impact. Inconsistent.

Green Knight's Poison Magic deals high damage over time on the few enemies that are vulnerable to it, making his Magic quite effective at dealing large amounts of damage.

This is offset, however, by the large amounts of rather challenging-to-face enemies, namely Snakeys, and Skeletons; that are resistant to Poison, and that Green Knight's Splash Attack has a small amount of knockback.

Another unique characteristic about the Green Knight is that his Heavy Attack rate, compared to other characters, is rather sluggish, and hits less times compared to the regular Heavy Attack.

This is the main reason why Green Knight is often considered to be the worst character and is extremely difficult to master. In spite of his powerful Magic; his combos forces the player to irritatingly adapt to an entirely different method of Juggling, and weakens or outright removes many powerful Juggling options that every other character possesses.

Contrary to popular belief, the Green Knight is not resistant or immune to Poison effects.

There is good news, however. Green Knight has normally, a below average Unlock Path, that unlocks one of the best Arena characters in Saracen.

Green Knight is to be attributed with Magic early on, but before you do that, maximize Agility. Recommended to use a high Strength weapon or a high Magic weapon that does not reduce Strength. The top 5 Animal Orbs in Snoot, Burly Bear, Hawkster, Piggy, and BiPolar Bear will suffice.

The most unique thing about Green Knight is his normal Heavy Attack combo. Thanks to FenixStryk and TheArcadeClassics[1], there is a comfortable lightweight infinite in

. A mediumweight combo in

. With these two combos mastered, you can get a Gold Skull with Green Knight in little time.

Green Knight's Magic is an inferior version of Orange Knight. His Heavy Attack actually doesn't affect him in his juggles. However, the Poison element effects every single player character, including the Snakey and Cult Minion. 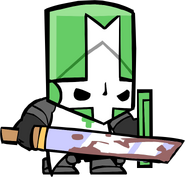 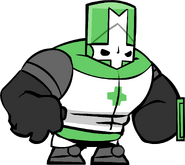 Royal Guard, a playable character that can be unlocked by completing the game as Green Knight.

Green Knight under the effects of the Sandwich, with a shocked Blue Knight.