Desert
Giraffey is one of the 29 Animal Orbs a player can obtain in the game Castle Crashers.

Giraffey is found during the Desert level through use of the Shovel. Giraffey is buried in an "X" at the final wave of Scarabs and Royal Guards where the insides of a pyramid are exposed and later covered up by an Alien Ship in the background.

Giraffey allows your character to gain XP faster (multiplied 1.1x), such being that every ten hits will count as eleven. This pet is somewhat useful for leveling up, though it's marginal benefit of only 0.1 extra XP per hit makes it usefulness questionable, especially compared to other offensive, beneficial pets. Still, the extra XP gain is proven to be useful if done right. 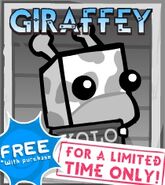 Giraffey as he appears as a head skin in the game BattleBlock Theater.