Barbarians
Thieves
Fencers
Industrial Prince
Green Princess
Blue Princess
Orange Princess
Crocodile
Owlet
Forest Entrance is the fifth Level in the game Castle Crashers. This level is very short and should not present a major problem to players. On Insane Mode, the same thing can be said except for an inexperienced player attacking the Thieves normally.

Inch your way to the right to make a small band of Thieves come out and attack you. One will be riding a small green dinosaur-like creature known as a Crocodile. Be sure to let him ride it out into the middle of the screen before knocking him off it. You'll want to simply jump on the creature's back once you've knocked off the Thief. While on the croc's back, you can basically be continuously moving while swinging your weapon at the same time. Head to the right and a cutscene will start. When the cutscene is over, you'll have to face off against a horde of Barbarians and one Beefy Thief. Do what you can to clear the screen of the Barbarians before attacking the large one. Melee weapons won't help you much against the large foe if you're on the ground, but jumping up and hitting him with your sword multiple times will knock him over and do sufficient damage. This is the fastest way to defeat him (if you don't have high level magic or agility) but if you aren't careful, though, he'll pick you up and hurl you. Alternatively, you can hop on the Crocodile and use your heavy attack button to have the croc chomp the enemy. This method is more safe than the first, but can still leave you vulnerable. If you don't want to risk any unnecesary damage against you, try to keep your distance and hit him with arrows or use your magic. This method will take a little while longer to defeat him, but will keep you safe.

Once the Beefy Thief has been dealt with, be sure to the ride Crocodile to the right. When you're ambushed by more Thieves, zigzag up and down across the screen and take out all the little guys. Continue to the right where you'll come to an entrance made out of bushes. More Thieves will come out of it and try to attack you. Defeat them with the same method as before, and go through the entrance to finish the level. 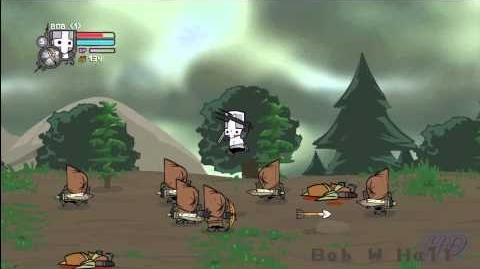