Complete the game with Orange Knight

55 (-10% DMG)
Fire Demon is an enemy and also one of the 31 Playable Characters in Castle Crashers. His magical attacks are Fire and his starting weapon is the Black Morning Star.

A Fire Demon is first encountered in Cyclops' Fortress fighting alongside an Elite Conehead. Their second appearance is in Lava World, where they are the primary enemies. At certain points in the level, Killing Fire Demons will make them drop a sandwich, which are needed to fight the Volcano and can be helpful against the Dragon and Sock Puppet. The sandwiches are also needed to access Industrial Castle.

Fire Demons are draconic in appearance. They have yellow eyes with oversized wings, and their big teeth are always shown. Fire Demon's element is completely comprised of Fire, similar to Orange Knight. Fire Demons are one of the main antagonists of Back Off Barbarian, along with Iceskimos and Barbarians.

Flame bursts up from the ground in front of you. Each upgrade level adds another burst of flame in front of the previous ones, up to a total of seven. This is more powerful, or about as powerful, than the Thorny Vines Splash Attack because it nearly has the same amount of hits at the same speed with damage over time. It's a great boss slaying splash attack, and it's very useful for heavy enemies, who take normal knockback from all fire based attacks.

The second most powerful Splash Attack in the game.

A ball of fire trailing orange smoke. The Fire DoT effect adds a nice bonus, with the downside being the Fire element itself, meaning some enemies will resist it. Equivalent to Orange Knight's "Fireball" Magic Projectile.

A ball of fire trailing orange smoke. The fire DoT effect adds a nice bonus, with the downside being the fire element itself, meaning some enemies will resist it. Equivalent to Orange Knight's "Fireball" Air Projectile. An advanced use of Juggling, named Spellweaving, can use this Air Projectile for flashy techniques.

to perform. Engulfs enemies in flames, with a nice hit of Damage over Time. Combined with the large amount of enemies with weaknesses to fire, this combo can be very powerful.

Leaps up with yellow and orange flame billowing out below, lighting enemies on fire. Equivalent to Orange Knight's "Fire Rise" Magic Jump.

Fire Demon is an incredible character with high unmatched capabilities, barring the other characters presumably having more comfortable, desirable capabilities, such as crowd control, crowd clearing, juggling, etc. Fire Demon has a fantastic movepool due to his options that makes him overall, the 2nd best boss slayer in the game. Typically, a Fire Demon player tends to capitalize Magic at some point in time, due to how incredibly potent it is in said certain roles. After the hurdles of stat attributing subside, Fire Demon becomes an absolute killing machine that faces little to no problems in the game. The deal breaker of Orange Knight's fantastic Unlock Path.

To take advantage of Fire Demon's Magic, one must decide to commit to Magic to maximize the damage output or potential that Fire Demon has in Castle Crashers. Fire Demon is an easy character to pick up and learn. His game plan is rivaled only by Orange Knight, another fantastic character.

In contrast to his power in Castle Crashers, Fire Demon is one of the more weaker characters to use in Arena. Orange Knight players have a much more efficient Splash Attack because of his range. For more Fire DoT, an Alien, Royal Guard, Conehead, or Gray Knight player are more deadlier than a Fire Demon player when played effectively. 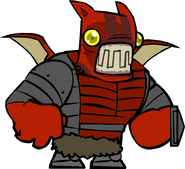 Back Off Barbarian antagonist and sprite.

Orange Knight; the character required to unlock Fire Demon after completing the game.

Ninja; a playable character that can be unlocked by completing the game as Fire Demon.

The last enemy wave in Cyclops' Fortress, which consists of a Fire Demon and an Elite Conehead.

The skeletal remains of a Fire Demon in the Undead Cyclops' Room.

A Fire Demon sitting at a counter in the Volcano Store.