Complete the game with Industrialist

50 (+0% DMG)
Fencer is an enemy and also one of 31 Playable Characters in the game Castle Crashers. His magical attacks are Non-Elemental and his starting weapon is Fencer's Foil.

Fencers are loyal to the Industrial Prince, as they are the bulk of his army and defend him from the invading player(s) or intruders.

Being true to their name, Fencers have dirty-purple armor, similiar to fencing-gear on the head and body. Fencers have a visible six pack. Their head back features a dirty-purple helmet with a single horn on the back, and a metal, grayish mask with 3 horizontal stripes (possibly for them to breathe), one being bigger, serving as a eye hole. Their arms and legs contains dark gray armor (arms and hands are darker) and they don't have any gloves. They have metal shoes featuring a sphere over them. In their portrait, they have a square-like shaped line on their mask's bottom, having more dynamic features, more circle-shaped pauldrons (shoulder armor) and a possible shadow or normally black part on their belly, which is possibly part of their armor under their purple clothes hidden by clarity.

They are equipped with the Fencer Foil's, a weapon that is, of course, a Fencing Sword suitable for combat.

Fencer, like Industrialists, have buzzsaw technology skills, using them to attack opponents and as power/magic.

to perform. A large buzzsaw blade couple moves across the ground for a limited distance. Each upgrade adds an extra buzzsaw, up to 7 total. Unlike other Splash spells, the first version has full range, and each upgrade adds an extra blade but not extra distance. Each blade can do 4 hits on enemies that aren't knocked over, unlike the typical Splash spell that does 1 hit per upgrade level.
Each buzzsaw spawns at a random size and distance from you, and some may start slightly behind you and not go as far. At max upgrade, this means the spell can protect you from both sides somewhat. The buzzsaws also take a while to finish after the casting animation is complete, so you can move away just after casting it while the buzzsaws continue to deal damage from where you were before.
Buzzsaws completely ignore all terrain including pits, slopes, walls, and the line in the volleyball game. This is another feature unique to them. This is the most powerful spell for defeating enemies that aren't knocked over, due to the number of hits. This makes characters using this spell able to defeat ground-based bosses in mere seconds. Even taking enemies that are knocked over into consideration, the spell is still overpowered because of the incredible crowd control capabilities.
When at max potential, this attack does approximately 2.9x more damage to any enemy that receives chain damage than the next most powerful Splash Attack, but at the same time it yields four times as much XP per cast of magic, making it the most effective form of magic for XP farming on bosses Catfish/Painter. Also, at maxed magic, when the Splash Attack is spammed, it can eviscerate Catfish before it even spits out a furball, but only on Normal Mode.
The only Splash Attacks that come remotely close in the same fast killing power ranks are Snakey and Brute's Thorny Vines, Ninja's Smoke Screen, and, to a lesser extent, Fire Demon's Flaming Pillars.

to perform. A small, round saw blade/buzzsaw used as a Magic Projectile with unlimited range and fast speed.

to perform. A small, round saw blade/buzzsaw used as an Air Projectile with unlimited range and fast speed.

to perform. Jump with purple steam cloud and steam sound effect that damages nearby enemies.

The best and strongest character in the game, alongside Industrialist. Fencer's Splash Attack has way too many upsides. This allows Fencer and Industrialist to trivialize any encounter in the game. The reduction of damage from attacking regular enemies is essentially buried under the positives of Fencer. The "Saw Trap" Splash Attack defies terrain.

Capitalize on Magic as soon as possible. Weapon choice almost doesn't make a difference due to how powerful the "Saw Trap" Splash Attack is. Fencer, Industrialist, and to a lesser extant any boss slayer in the game, bar Fire Demon and Red Knight, truly only struggle against massive amounts of enemies or a very quick heavyweight such as in Thieves' Forest and Wizard Castle Interior and Conehead Groom, respectively. Especially if the Fencer player can not utilize Juggling at all to save his/her life. The "Saw Trap" Splash Attack alleviates a lot of that stress, admittedly. Easiest Normal Mode and easiest Insane Mode, when the latter is mastered.

Late game, Fencer lives up to his reputation. Recommended to use a Strength heavy weapon or a Magic heavy weapon that does not reduce Strength. Animal Orb selection does make a bit of difference. The top 5 Animal Orbs in Snoot, Burly Bear, Hawkster, Piggy, and BiPolar Bear will suffice.

If it wasn't any good enough, Fencer is a decent Arena character. The "Saw Trap" Splash Attack, while lacking time and regeneration, still functions with the overpowered nature of it, leading to an easy mediumweight juggle. 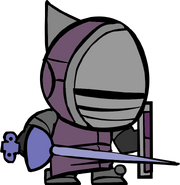 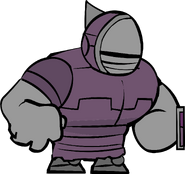 Industrialist; a reskin of Fencer, and the character that can be used to unlock Fencer.