50 (+0% DMG)
The Evil Wizard is the main villain in Castle Crashers and the last of the four final bosses, who steals the magic crystal in the very beginning of the game.

The Evil Wizard is responsible for stealing the magic crystal, kidnapping the four princesses, and the monsters that plague the land. He is also responsible for all the "beefy" enemies roaming the kingdom. His goal is to take complete control of the world and turn into his own personal domain filled with death and despair. To exert his power and influence, he seems to have been scouring the lands for crystals that contain immense power so that he may use their power to not only conquer the world but use their power to shapeshift into various forms. To accomplish his plans, he has set up many of the crystals to power his fortress in order to give it enough power to launch it into space and reflect their power into every corner of the Earth and place it under the Evil Wizard's control.

Aside from his obvious lust for power, the Evil Wizard is also extremely sadistic and violent, causing death and destruction wherever he goes and is personally responsible for the deaths of millions, perhaps even billions of people. His fortress is located in a barren wasteland filled with skeletons and his throne room contains a fallen crown, hinting that he completely and utterly annihilated any towns, cities, murdered the king, and usurped his power and fortress for his own purposes. From there on, his fortress became a place of such vile horror and violence that certain rooms began overflowing with blood, skeletons, and one particular room even contained thousands of mutilated corpses from various races that have been tortured to death.

As the Evil Wizard built up his power, his army extended into millions of warriors ranging from barbarians and cut-throat thieves, to his own personal followers (including the Necromancer) to do his bidding. In order to help in his quest for world domination, the Evil Wizard forms relationships with other kings from other lands, bribing them to help him conquer the world by promising them a princess. It is for this reason that the Evil Wizard abducts the princesses to give to the other rulers in exchange for their kingdom's allegiance to him, while also intending to keep one by his side when he conquers the world. Through this, the Evil Wizard gains machinery from the Industrial Prince to help him reinforce his army and gains demonic warriors from the Cyclops and the Frost King. With these three kings under his rule, the Evil Wizard massacres the land, even using the Necromancer to reanimate many that he killed to join his army.

With his humongous army, the Evil Wizard leads a full-scale attack on the Castle Crashers' kingdom, creating a war of unspeakable violence and death. He succeeds in stealing the crystal and abducting the princesses, leaving the land barren and millions dead. The other kings succeed in conquering other lands and place them under their control, later inheriting the princesses as planned. The Evil Wizard would personally survey many lands to attack and conquer, and rally more for his plans.

1. In the first stage of the battle, the wizard will attack you with floating crystals. Simply dodge these until they are stuck in the ground and then attack them. Magic works fairly well on them. If you can, walk horizontally across the screen so the crystals land in a line, and use your splash attack to hit all four at once.

2. In the second stage, he will hop down from his platform and face the player(s) directly. You can only use magic on the wizard when he is in his blue bubble, and can only use melee, bows or items (boomerang, sandwiches, bombs) while he is in the red bubble. When the bubble flickers yellow, it means you have inflicted damage on him, if you inflict damage with the wrong ability, however, you will take damage. The wizard is not defenseless either. If his bubble is blue, he will shoot three dark energy balls (magic projectiles; dark shots), if his bubble is red, he will blast a wave of dark magic (splash attack; dark pillars).

3. In the third stage, he will start to float around; just jump up and melee him. While he is floating, white energy balls will fall from him. These balls fall one at a time, and when they hit the ground, they will bounce and divide in several smaller white balls which will start to float outward. Avoid getting hit by these balls as they will hurt you. The smaller balls can be blocked with your shield. Once you have beaten this stage, a Boss Chest will fall on him. It would appear like you have finally beaten him, but upon opening the chest, he will come out as a huge spider.

4. In the fourth stage, he will turn into a large flying spider. A good way to beat him is to jump and use magic or sandwiches. A very easy way to beat him is to spam bombs at him when he comes out of the chest. Just keep hitting him until he dies. He frequently tries to jab you with his large side claws, and this can be blocked continuously with your shield. During this stage, he continuously spawns Cult Minions, be careful not to get cornered by them. An excellent way to beat this stage (if you have your magic upgraded to having the jump attack) is to run under his clear shadow so that he does his clambering attack. This attack is long, allowing 2 magic shots in before he goes back to moving. Because of his size, he can be easy to kill as long as you aren't on the ground. Another way to kill this stage is to drop 9 bombs on him immediately after opening the chest. He will only have about 5% of his health left. Also, instead of the boss's health increasing by 10x on insane mode, its health gets cut into 1/10th of its original health.

5. In the fifth stage, just like the third one, he will start floating around. This time he will be a bit faster and a little harder to hit. Just jump up and melee him. The white balls will fall quicker and very frequently.

6. In the final stage, he will unleash his new weapon, the Demon Sword, and takes the battle with the knights one last time. In this form, he will move fast while summoning fireballs from the sky to come down on you using his sword. Your best bet is to just wait until he jumps up to attack him. Jump up with him and get a few hits in before one of the fireballs hits you or dodge the fireballs by sprinting; then start to circle back when he starts to come down and hit him with a rolling attack, he can also fire a magic blast at the player, which is easy to dodge. This works so well because when you are in the air, the fireballs won't hit you most of the time. When his life is about 25% of the way down, he will start doing a cartwheel across the screen while holding his Demon Sword. He goes in a straight line down the middle of the area, so he is easy to avoid. Take this opportunity to finish him.

After defeating him, his fortress will crumble and he'll plummet to his death. He'll leave the magic crystal and the Orange Princess behind. He drops the Demon Sword, but you only have about five seconds to pick it up. There is an off chance that the Demon Sword will fall out of reach, being either in the background or not on the platform entirely, depending on where you kill him. Afterward, you will catch the Orange Princess and see the end credits. After the end credits the knights are found in the king's castle having a party when the king walks into the room with the last princess. The knights then are forced to have a duel to the death for the princess. The winner will kiss the princess before the princess is revealed to be a clown. 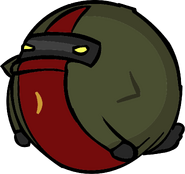 The Evil Wizard in his balloon form.

The Evil Wizard in his spider form.

The Evil Wizard holding his Demon Sword, in the final stage.