Saracens
Camels
Scorpions
Royal Guards
Zebra
Desert Chase is the twenty-fourth level in the game Castle Crashers. On Insane Mode, the Saracens can easily kill a player who isn't at a good height for juggling or a player who can't abandon their juggle.

As soon as you start the level, a Saracen riding on a camel will come to attack you. Knock the Saracen off his camel and jump on this mount yourself, move to the far left corner of the screen, and jump off the camel so that no other Saracen or Royal Guard can mount it and mindlessly swinging on the camel is a waste of time. Watch out for the quicksand along your way.

A brief cutscene will play that shows a Saracen on a camel with an Animal Orb following him. It is up to you whether or not you should kill this Saracen.

Go through the sand castle entrance to finish the level. Next comes the Sand Castle Interior level. 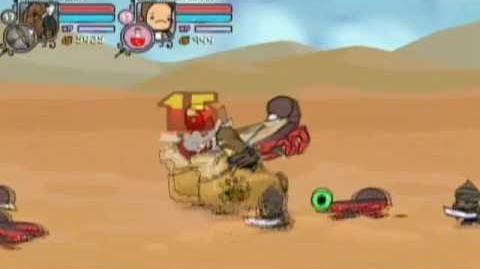