Scorpions
Antlions
Scarabs
Royal Guards
Giraffey
Aliens
Alien Ships
Desert is the twenty-second level in the game Castle Crashers. On Insane Mode, this is considered to be the hardest level in the game, alongside Marsh and Wizard Castle Interior. The difficulty spike may come as a surprise to newer players of Insane Mode, as it comes from the Scarab enemies that have an abundance of health. With them into effect, the level is also just as time consuming as Full Moon.

Throughout this and other desert levels, Scorpions will continuously be migrating across the screen in both directions. They are not part of typical waves of enemies, so you don't have to kill them to proceed. They can be annoying, though they only take one hit to defeat. A Scorpion moves in a straight line, so you can easily step out of its way. If you are directly in front of one, it will try to sting you. The easiest way to take one out is to walk around it and hit it from behind.

When you first enter the Desert, you will see the Shovel next to a sand castle. Grab it. This allows you to dig up treasures and items that are buried in locations denoted by an "X" on the ground. One of those "X" locations is right in front of the sand castle, so try it out.

The first enemy you encounter is an Antlion. It is a large insect that emerges from a quicksand pit. If you get too close, it will grab you (be careful, the quicksand will draw you in, but you won't die, it only draws you toward the center). The Antlion will not leave the pit, but it can spit acid at you from a good distance. Kill it to proceed.

Next, you will encounter two more Antlions. Kill them and move on.

You now meet your first Scarab. Periodically, it will dive underground and tunnel around very quickly. Jump over it when it comes near and tries to knock you down. When it's above ground, kill it. You can also use your shield while staying on the same line as it during its underground state. This is more risky, however.

After your first Scarab, you immediately encounter two more.

After that, you get another lone Antlion.

Next, you are faced with a lone Scarab and two Royal Guards.

Then, another lone Scarab and three Royal Guards.

Where you encounter this last wave of enemies, Giraffey, the Animal Orb, is buried. Notable for the Royal Guards using their damaging "Arrow Rain" Splash Attack and their incredibly damaging "Dust Jump" Magic Jump.

Now you will meet the Alien Ships. The ships will drop Aliens to fight you, and will occasionally try to drop large stone slabs to crush you. Aliens are very weak and typically go down after one or two hits, and the ship itself is also fairly easy to defeat. However, once you beat it, you're confronted with another ship. Take down the second ship, and you'll encounter a giant ship. Step into the tractor beam to be taken up into the next level, Alien Ship. 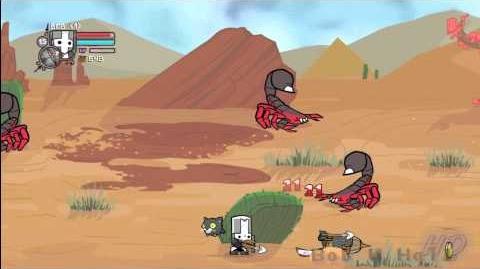 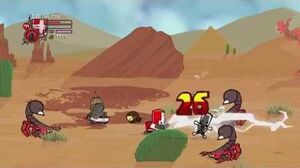