Coneheads
Elite Conehead
Snoot
Fire Demon(s)
Cyclops
Cyclops' Fortress is the seventeenth level in Castle Crashers. The combination of waves of Coneheads followed by the battle with the Cyclops can really drain health, so Health Potions are recommended. On Insane Mode, this level provides a decent, but annoying challenge in that you either perform many Level 50 combos or heavyweight juggles, but get shut down by constant bomb throwing.

When approaching the right, one will find the Cyclops mourning over the coffin of the Conehead Groom while the Green Princess is trapped inside of a cage. The Cyclops then engages in fight against the player, in anger of the death of the Groom.

Fighting the Cyclops after all those Coneheads can be a bit of a pain. It's recommended that you bring some Healing Potions with you. The Cyclops will raise his arms and swing them over his head and slam his knives into the ground. You'll want to attempt to avoid this by moving vertically, trying to move away or jump over will 90% of the time result in failure due to his swings reach and speed. After the Cyclops slams his blades into the ground he will pause and you will be given the chance to strike at him. Try jumping into the air and performing a midair combo with Heavy Attacks before he stands up and attacks again. If you can stay to his back side you should be able to avoid getting hit. After four to five slams he will start throwing knives at you. Do your best to avoid these with vertical movements or simply raise your shield up. Keep up your midair attacks and watch your health bar.

Once the Cyclops is left with at least 30% of health he will go into a fit of rage which increases his speed and attack damage. Though at first a curse it does have its advantages. After each knife toss, the Cyclops will have a momentary pause to go into his rage mode. In this pause, the player can attack him and get in some damage before he attacks.

Once the Cyclops is at 0 health, he accidentally slides into the lava grave (possibly prepared for the Conehead Groom). He will flail around before finally sinking into the lava with a thumbs up. A Boss Chest appears, and afterward, the player kisses the Green Princess (Or after dueling, if in multiplayer) and the level ends. 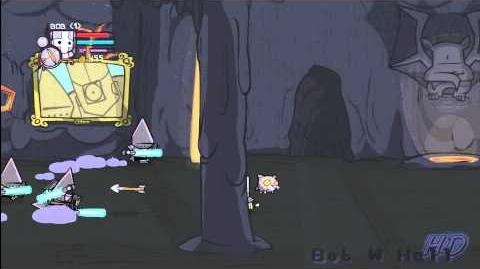