Coneheads
Imps
Slimes
Thieves
Cyclops' Cave is the fifteenth level in the game Castle Crashers. Players should be careful not to get cornered by the sheer volume of enemies that they will sometimes face. On Insane Mode, the introduction of the heavyweight Coneheads can prove to be annoying due to how little it takes for one or several of them to kill a player.

The level starts with the player entering the cave from the Parade level. 5 food items (including the mushroom in the bottom left that gives food when attacked) are located at the entrance.

When moving right, some Thieves are seen scoping the carriage from Parade. A troop of Coneheads is then seen approaching from the left.

To the right, 3 mushrooms are located. Players should attack these then collect the food that the mushrooms leave, for health to recover from the previous wave.

To the right, a large golden-colored gate with an eyeball on the top lies, marking the entrance to the Cyclops' Gate level

There are no animal orbs to be found on this level.

Multiple Thieves detecting the player(s) in the level. 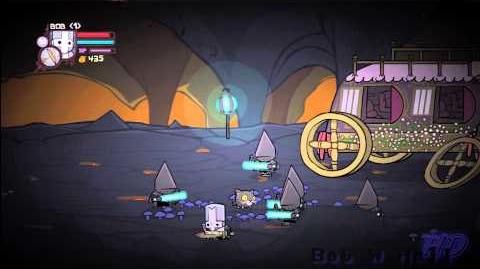