The Cyclops attacks players by hitting them with a powerful double dagger stab, or throwing knives. He moves very fast, especially on Insane Mode, so players should use caution. After stabbing his knives into the ground four times, he will throw five knives at the player, which are deadly if hit in a close range, especially on Insane (300 hit). They can be dodged or blocked. Be careful when standing in his way when he's ready to stab, this attack cannot be blocked with the shield. At about ¼th of his health, he will glow red after throwing knives and begin running at the player as he does his stabbing move. This will make him considerably faster and make the end of the battle more difficult.

To defeat the Cyclops, attack until he begins his stabbing animation, then dodge the attack (this may take practice). Move to his back, or anywhere else, where he can be attacked. Slash him a few times until he pulls the daggers up again. Dodge the attack again and repeat the previous step. When he starts throwing knives, just block the attack. He will usually move away from the player to throw the knives, so this is a great opportunity to use the bow or ranged magic. Repeat the above steps, until he is defeated. High Agility is also recommended.

If a character counts with a multiple hit Splash Attack, and if his Magic stat has been upgraded to a considerable degree, he will be able to deal a big amount of damage to Cyclops in a very short time; a strategy that works with almost all enemies who can't be knocked down.

When the Cyclops is defeated, he will run into a poorly placed pit of lava. Then, he will spin his arms around 3 times in an attempt to get out of the lava, before finally giving in, giving the player a thumbs-up while sinking down.

Cyclops, The Groom, and Green Princess.

Cyclops holding the limp body of The Groom.

Cyclops taking the Green Princess from the thieves on the mission Tall Grass Field.

Cyclops on the carriage 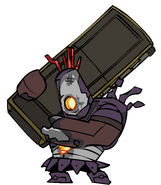