60 (-20% DMG)
Cult Minion is one of the 31 Playable Characters in the game Castle Crashers Remastered. His magical attacks are Non-Elemental and his starting weapon is the Glowstick.

Cult Minions are seen in the Wizard Castle Interior level, and are summoned by the Evil Wizard in the Final Battle level.

Evil Wizard's personal army. Cult Minions are prominent in the beginning of Wizard Castle Interior. "Born" from the Evil Wizard, too.

The Cult Minion has a large resemblance to the Evil Wizard, as they wear a tunic similiar to the Evil Wizard tunic, but has red eyes instead of yellow eyes and has a different(and more dynamic) body shape. His Wizard Suit features a Dark-Green and Red color. He also features a Moon Symbol on his torso, as-well as armor on his limbs. On his beefy version, his red color scheme(including the moon) have a smaller size, they lack arm's armor and they have a Dark-Green possible backpack. His Shield is similiar to their clothing's color scheme and a rough overview.

Dark energy bursts up from the ground in front of you. Each upgrade level adds another burst of darkness in front of the previous ones. It does damage to all enemies based on their defense. At. high levels, it makes short work of most bosses.

Shoots a dark projectile that moves faster than normal. The non-immunity follows through with this spell as well. Very effective against bosses and the Evil Wizard's minions.

Shoots a dark projectile that moves faster than normal. The non-immunity follows through with this spell as well. Very effective against bosses and the Evil Wizard's minions. An advanced use of Juggling, named Spellweaving, can use this Air Projectile for flashy techniques.

Jumps with a dark magic boost and does damage to overlapped enemies.

Cult Minion's "Dark Pillars" Splash Attack is a decent option, for Juggling. It is not to be considered boss slayer material. Identical to Skeleton and Barbarian. Average character.

Cult Minion's incredibly easy to pick up and learn. His game plan is similar to Necromancer's except, the "Dark Pillars" Splash Attack has range. Can be used as a tank on elemental levels like lava world, as has near complete immunity to elemental magic. 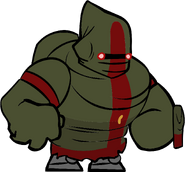 Cult Minion as he appears in the left of the XBLA exclusive Necromantic Pack DLC Banner.