75 (-50% DMG)
The Conehead Groom is one of the bosses in Castle Crashers. Due to his very quick and powerful attacks and his incredible movement speed, he is one of the most challenging bosses in the game, if not the most; as the Necromancer is only considered difficult because of the enemies before him, and as a standalone boss he's very easy, even on Insane Mode. He takes the appearance of a Conehead with a Black Tuxedo and has slightly more powerful skills than a normal Conehead.

He founded the Conehead Army. When he died, the Cyclops, upon exiting the restroom, was deeply saddened by his death, and leaves with the Green Princess. It's also assumed that Conehead Groom is the King of Flowery Field, Wedding Crash, Church Store and Parade locations in Overworld Map.

He tries to marry the Green Princess after her kidnapping in his Cathedral stronghold. After crashing his party, he will take his would-be bride to the altar, where the battle will start.

Following his demise, he also appears later as an undead warrior for the Cyclops, released from the same coffin witnessed earlier in the game. When the Undead Groom enters, he does 81 damage to any unlucky players who wander near. When the Undead Cyclops is killed, the boss chest lands on him showing a ghost of the groom and cyclops. He makes one final appearance at the ending celebration, as a ghost playing a harp.

The fastest way by far of killing him is to use bombs. It will only take around 4 bombs to kill him so it will only take a few seconds. On Insane Mode, you will need 40, but if all four players all carry max bombs they can carry up to 36 bombs (but due to the +1000 health to the boss per player, this will not effect it too much).

Another good way to dispose of the Conehead Groom is by using the "What Piano?" technique. The basic idea is to have two or more max agility characters standing at both sides of him (the farther apart the better, as he can throw bombs at you, which can knock one of the max agility players over or force them to dodge, when it could be avoided just by staying spread apart). Each character spams arrows, and the Conehead Groom will seldom touch the floor. The more players there are spamming arrows, the less probable he'll touch the floor. When he hops on the Cannon Piano and plays, he will be invincible, so don't bother attacking him. Instead, you'll need to avoid the target markers on the ground. The easiest way to avoid this is by using the levitation combos such as

On single player, the Conehead Groom will roughly take 250/267/308 arrows to kill with max Agility attributed and with +4 Agility/+3 Agility/-3 Agility from full health on Insane Mode. By positioning yourself at the piano, the Conehead Groom will usually be immobilized by the player and can only interrupt the arrow spam by running to the Cannon Piano.

The Conehead Groom can also be juggled with

, so long as you delay your first hit in order to not just immediately knock him over and end the combo with a single hit. This works on other heavyweight enemies as well.

The Conehead Groom can't escape this, because as it is with light enemies, it's an infinite juggle combo, making it the safest possible tactic to fight the groom with. With more than one player, you can twin juggle him with

With the Sandwich it is possible to kill the Conehead Groom quicker using this method on the PS3, Xbox One, PC, Nintendo Switch, and PS4 versions of the game. By tapping

, the Conehead Groom's health will be drained rather quickly.

The Conehead Groom's Fight Glitch is a glitch caused when throwing the Conehead Groom while in Beefy form, which will cause the groom to fly across the battle area in loops until he reaches an area above a bench or is hit again. This glitch has no practical effect.

Note: Since he is part of the stage Wedding Crash, that level is included in this video. (Skip to 10:25 for the fight with the Conehead Groom) 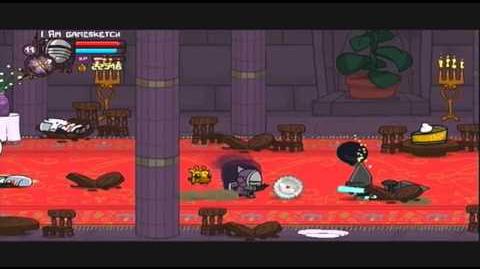