Medusa's Lair
Chicken is one of the 29 Animal Orbs a player can obtain in the game Castle Crashers.

Chicken can be obtained in Medusa's Lair. Using a shovel, the player can find (and therefore obtain) him by digging on the "X" mark before the first water puddle at the start of the level.

Boosts +1 Strength, +1 Defense, and +1 Agility. Overall, not a bad Animal Orb, generally speaking, but there are many better options for stat distribution such as Scratchpaw, Zebra, or even Snailburt.

How to obtain the Chicken. 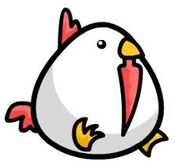