Single-player, multiplayer
Castle Crashers Remastered is a remastered version of the game, Castle Crashers that is available for the Xbox One, PlayStation 4, Nintendo Switch, and is the current format for the Steam version.

Castle Crashers is a beat 'em up game where an Evil Wizard steals a large crystal and kidnaps the four princesses from the castle. He then sends an enormous army of barbarians, thieves and other enemies across the land to stop the Knights in their path. Your mission as the Knights is to travel across the land to retrieve the princesses, the crystal, and stop the Evil Wizard from destroying the land.

Castle Crashers Remastered has several differences from the original. This includes 5x increase in texture sizes, uncapped framerate (60 FPS), various performance updates and improvements to gameplay and online multiplayer, as well as a new minigame called Back Off Barbarian.

These are features that have been added in the remastered version that were not in the Xbox 360 Version. These features were already existing on the Steam and PlayStation 3 Versions.

In order to get Hatty Hattington, the Golden Whale, Emerald Sword, Lightning Bolt, Cardboard Tube, and Ninja Claw on Steam, you must purchase BattleBlock Theater. After doing so, start up Castle Crashers, and these features will be unlocked. 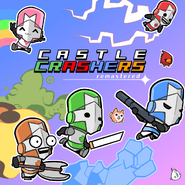 Poster for the Nintendo Switch version.

Poster for the Xbox One version.