Tall Grass Field
Burly Bear is one of the 29 Animal Orbs a player can obtain in the game Castle Crashers.

Burly Bear is located in the Tall Grass Field level. He is found hidden behind a boulder next to the cliff-side climb, near the end of the level. Instead of climbing up the ledge, the player must eat a Sandwich and go to the left side of the cliff. It will prompt the player to press

to pull a rock out of the way.

Going through the hole will show a small crack, but 2 Bombs can blow it up to open; either from store bought bombs or bombs produced by the Conehead, Royal Guard, or Gray Knight from their Magic Projectile or Air Projectile. When opened, enter this crack and go to the far right until you hit the wall within the exposed tunnel to grab Burly Bear.

On Insane Mode, the process to get to the tunnel might be more challenging if you mess up a Beefy Juggle or get hit by a Bear's Tornado Splash Attack one too many times.

"Strength/Strength and Defense Boost"Burly Bear gives your character +2 Strength. This effect is exactly the same as Snoot's stat. Good when paired up with the Gold Skull Mace and Chainsaw. This effect is only in the Original versions of Castle Crashers.

Burly Bear gives your character +3 Strength and +1 Defense. This effect is only in the Remastered versions of Castle Crashers. Comparably, this is an okay alternative to Snoot, as you have a massive Strength gain and extra Defense. Same weapons that work well with Snoot, will work well with Burly Bear, such as the Gold Skull Mace and Chainsaw. 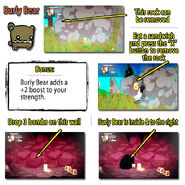 How to get Burly Bear.