Complete the game with Iceskimo

80 (-60% DMG)
Brute is one of the 31 Playable Characters in the game Castle Crashers. Their magical attacks are Non-Elemental and their starting weapon is the Dual Prong Sword.

The player(s) first encounter Brute as a Beefy grouped up with 2 Fencers and has Cardinal as his pet in Industrial Castle. Then, a Brute or several of them can potentially be summoned as Skeletons by the Necromancer when the Necromancer is first introduced in Lava World. Finally, a Beefy Brute is resurrected again by the Necromancer in Wizard Castle Interior.

It is assumed that the Brute in Industrial Castle serves the Industrial Prince as he works with Fencers to fend off the player(s).

The Brute is not normally seen in his regular form, hence the name, due to his Beefy exclusive form. A player controlled Brute shows that he is quite muscular regardless of form. In the character portrait, the Brute has three visible scars on his helm. The helm appears to be samurai-like with 2 horns and a Mohawk-like brush in the middle of it.

Thorny Vines pop out of the ground almost instantaneously in front of you, doing one hit each. Each segment adds an extra hit, with the maximum being 7 hits. Every other segments add no range, but all segments add an extra hit. This is incredibly good for bosses that have huge hitboxes as the Splash Attack deals a decent amount every time it is spammed or that it delivers significantly more hits on them than say Skeleton and Cult Minion's Dark Pillars Splash Attack. This Splash Attack is also very effective on enemies that take chain damage such as Scarabs, Fish Men, and Beefys. Brute and Snakey share the same Splash Attack.

Throws an acorn as a Magic Projectile.

Throws an acorn as a Air Projectile. An advanced use of Juggling, called Spellweaving, can use this Air Projectile for flashy techniques.

Leaps up using a vine that damages overlapped enemies and has a whip sound.

Brute is a decent boss slayer with a good Beefy hitting ratio with his "Thorny Vines" Splash Attack. Hitting the Beefy up to knockdown. Completely identical to Snakey and Ninja in terms of viability.

Capitalize on Magic as soon as possible. Weapon choice almost doesn't make a difference due to how fair the "Thorny Vines" Splash Attack is. Brute, as well as any boss slayer in the game, bar Fire Demon and Red Knight, truly only struggles against massive amounts of enemies or a very quick heavyweight such as in Thieves' Forest and Wizard Castle Interior and Conehead Groom, respectively. Especially if the Brute player can not utilize Juggling at all to save his/her life.

Late game, Brute is above average. Recommended to use a Strength heavy weapon, a Magic heavy weapon, or both. Animal Orb selection does make a bit of difference. The top 3 in Piggy, Snoot, and Hawkster, will suffice. 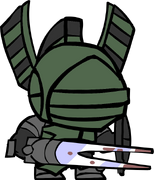 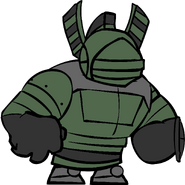 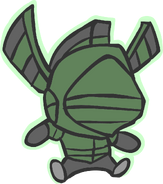 Snakey; a reskin of Brute, except Snakey uses a different looking Magic Projectile and Air Projectile.

Iceskimo; the character required to unlock Brute after completing the game.

An undead Brute as a Skeleton wielding a Skeletor Mace in Lava World.

Brute's appearance in the Steam, Xbox One, PlayStation 4, and Nintendo Switch versions of Castle Crashers.