Levels
Blue Knight is one of the 31 Playable Characters in the game Castle Crashers. Their magical attacks are Ice and their starting weapon is the Sheathed Sword.

Blue Knight, befitting of his name, dons a blue themed helm and tunic. He is usually portrayed as the most bored out of the knights. When injured, he can be seen crying or closing his eyes, mouth open.

Blue Knight is one of the King's Knights, to whom he serves with loyalty, helping to get the princesses back and defeating the Evil Wizard.

to perform. At max level, the "Ice Shards" Splash Attack has no gaps in their landing location. With each shard being able to freeze normal enemies, this Splash Attack can be very useful with a full team of 4 being able to Juggle freely without taking any damage.

Unfortunately, it has a major downside. Unlike all other Splash Attacks, its Magic cost actually goes up each upgrade level, such that you will never be able to cast more than two times in a single full Magic bar. Thus, it drains Magic desired for other Splash Attacks and cannot be used as often.

This Splash Attack will never hit enemies that are already frozen.

to perform. A pointed bullet of ice. The fact that this freezes normal enemies makes it an extremely powerful Magic Projectile. Only one enemy is immune to its freezing effects, though. Also, this Magic Projectile will always do damage even on frozen enemies, which will unfreeze them.

Unfortunately, it has a major downside. Unlike all other Air Projectiles, its Magic cost actually goes up each upgrade level, such that you will never be able to cast more than two times in a single full Magic bar. Thus, it drains Magic desired for other Air Projectiles and cannot be used as often.

This Air Projectile will never hit enemies that are already frozen.

This Air Projectile is probably the determining factor in Blue Knight being considered to have the best crowd control and best crowd clearing potential in the game, because you can use it in the air, in addition to the ground. It can potentially save your life when using it on the ground might screw you over.

An advanced use of Juggling, named Spellweaving, can use this Air Projectile for flashy techniques, albeit constrained to 2 casts.

to perform. This is considered the best Elemental Infusion in the game, because it can be used infinitely on an enemy.

When performed, the attack will freeze the enemy. This allows for the

to be repeated infinitely without the enemy having any chance to retaliate. The Ice effect does not reset the hit counter. Because of how the combo can be repeated, using the drill combo (

) is not optimal or needed.

Weapons with elemental effects may cause the enemy to break out of the freeze, allowing the enemy to retaliate, so it is worth keeping in mind not to use those weapons, especially on levels like Full Moon.

to perform. A giant fist made of ice punches upwards, boosting you into the air. Freezes any enemies that you are overlapping when used. Note that it will do damage to frozen enemies and thus unfreeze them. This Magic Jump is easy to start up a juggle or the "Ice Encasement" Elemental Infusion psuedo-infinite.

The only main downside to Blue Knight is that his Splash Attack and Air Projectile are expensive, only allowing 2 consecutive Splash Attack casts before needing to recharge fully to do again.

Due to Blue Knight's exclusive abilities, this considerably makes Blue Knight one of the best characters in Castle Crashers. In addition to this, Blue Knight arguably has one of the greatest unlock paths out of any character in the entire game, rivaled only by Orange Knight, normally.

Typically, a Blue Knight player tends to capitalize Magic at some point in time, due to how incredibly potent it is in said certain roles. After the hurdles of stat attributing subside, Blue Knight becomes a methodical killing machine that faces little to no problems in the game. Trivializing any encounter with regular-type enemies and Beefys alike.

Very good character in Castle Crashers. Capitalize on Elemental Infusion, at the minimum or maximize Agility. Then, commit to maximizing Strength due to his downside. Recommended to use a Strength heavy weapon or a Magic heavy weapon that does not reduce Strength. Animal Orb selection does make a bit of difference. The top 5 Animal Orbs in Snoot, Burly Bear, Hawkster, Piggy, and BiPolar Bear will suffice.

Late game, Blue Knight lives up to his reputation. While boss fights may take longer to get through, boss slaying is not what makes or breaks a character, warranting Blue Knight's position in tier lists, as well as any character above, equal to, or below Blue Knight.

The best character in Arena. His entire kit is useful for mediumweight juggling, as well as having an oppressive neutral game. 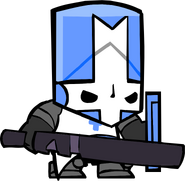 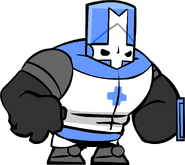 Industrialist; a character that can be unlocked by completing the game as Blue Knight.

Green Knight under the effects of the Sandwich, with a shocked Blue Knight.