Levels (character version)
Barracks (Home Castle and Final Battle)
Blacksmith (NPC version)
Blacksmith is one of the 31 Playable Characters in the game, Castle Crashers. His magical attacks are Non-Elemental and Fire. His starting weapon is the Hammer.

The Blacksmith appears in the game as an NPC in the Blacksmith level and in the Barracks, without a mask and striking a red-hot weapon on an anvil. Finally, the Blacksmith reappears smiling in the Barracks after the Final Battle level has been completed with Weapons Frog by his side. He is avalible from the start of the game on Xbox One, Playstation 4 and Nintendo Switch versions of the game, in contrast to the PlayStation 3 Version, Xbox 360 Version and Steam Version, where he needs to be unlocked through purchasing downloadable content, namely the Legend of the Blacksmith Pack.

The Blacksmith dons a unique purple helm adorned with antlers and a tunic with brown belt-like straps around his stomach and waist. In regular gameplay, shown in the Blacksmith level, as any other character, reveals that the Blacksmith has black hair, styled the same way as that of the Civilian, and has dark skin; also, the Blacksmith owns his pet, Weapons Frog, which has its tongue tied to the Blacksmith's anvil, where its main purpose is that the player(s) can go inside of its mouth to change and compare weapons, as well as gain additional information about each weapon.

to perform. When used, a Frogglet will appear behind the player and stick its tongue out to damage any foes it hits. It's unique (in a bad way, unfortunately) in the number of max hits it deals, which is three; the normal max for any other character is seven. The only real function of it is for crowd control.

to perform. When used, the player shoots a dark flaming hammer. If an enemy is successfully hit by the hammer, said enemy continues to take fire damage for one second.

to perform. When used, a Frogglet will appear below the player and stick its tongue out to damage any foes it hits from the ground in a set position when the player initially casted the spell at. It's unique (in a bad way, unfortunately) in the number of max hits it deals, which is three; the normal max for any other character is seven. The only real function of it is for crowd control. Practically useless for Spellweaving.

to perform. When used, a dark spring-like device appears below the character, who is then launched into the air as the device breaks beneath. The device will also do damage to anyone close to its launch.

Blacksmith's Splash Attack, while good for initiating juggles, has fewer hits on bosses, for instance, and is very glitchy. His Magic Projectile, has fire properties, so the DoT on enemies weak or resistant to it, still applies, but it isn't usually used in favor of the Splash Attack. His Elemental Infusion is pretty standard and has its uses, being high damaging and is good with the Drill Spin combo. Overall, Blacksmith is considered to be an underwhelming character in the game, due to his lacking Splash Attack that leaves him vulnerable and reliant on arrow spamming on the tougher parts of the game. The Magic Projectile does not do him any favors, despite being also Fire.

Blacksmith struggles with the difficult levels such as Desert and Full Moon. It is best to attribute to Agility first or to Magic for the Elemental Infusion, first. Recommended to use a Strength heavy weapon or a Magic heavy weapon that does not reduce Strength. Animal Orb selection makes a bit of difference. The top 5 Animal Orbs in Snoot, Burly Bear, Hawkster, Piggy, and BiPolar Bear will suffice.

Blacksmith is an underwhelming character in Arena. His Splash Attack has no knockback, so Blacksmith has to rely on catches and Magic Jump resets. 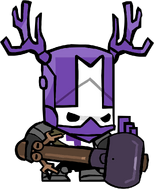 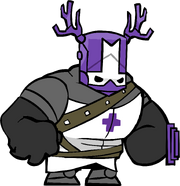 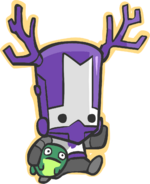 The Blacksmith as he appears in the level of the same name.

The banner for The Legend of the Blacksmith Pack. It is believed that this image was from the XBLA marketplace before the Xbox 360's dashboard and user interface was updated in 2011, removing any and all banners from being visible.