Animal Ark
Beholder is one of the 29 Animal Orbs a player can obtain in the game Castle Crashers.

Obtaining the Beholder is slightly more complex than the other Animal Orbs. You must first play through Full Moon with Cardinal after retrieving him from the Industrial Castle.

Cardinal will find the Key Sword and give it to you. You must then head back to the Animal Ark to hit the lock with the Key Sword in any way you see fit. The lock will break off and allow the door to open, bringing you to a dark room with Beholder in it.

Beholder will increase your Magic stat by +2 skill points. This is thought of by a lot of players to be a very useful effect; this isn't the case, however. The +2 Magic will only affect damage outside of the use of a +3 Magic weapon to become +5. In terms of Magic bonuses like faster regeneration, greater splash attack range/hits, etc., +1-4 Magic is essentially the same as +0, and +6-8 is the same as +5, so outside of the use with a +3 magic weapon, the Beholder is only impairing XP accumulation, and when there are plenty of pets that have uses far more effective than damage, using Beholder outside of bumping +3 magic weapons up is pointless. This effect is only in the Original versions of Castle Crashers.

Beholder will increase your Magic stat by +4 skill points. Finally, the Beholder is in a now favorable position as even +1 Magic items receive the benefits from synthetic Magic boosts. Notable weapons to use with the Beholder include the Evil Sword, Demon Sword, and King's Mace. This effect is only in the Remastered versions of Castle Crashers.

The Beholder from Dungeons And Dragons.

Beholder as he appeared in the old Castle Crashers format. 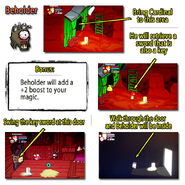 How to obtain Beholder.

The Key Sword needed to unlock the Beholder.