50 (+0% DMG)
Barbarian is one of the 31 Playable Characters in the game Castle Crashers. Their magical attacks are Non-Elemental and their starting weapon is the Barbarian Ax.

The Barbarians are the ones that attack the Home Castle, and kidnap the four princesses at the beginning of the game. They have been fighting in a war with the Home Kingdom for some time, and it is the player's duty to turn the war in favor of the King and his soldiers. They are completely loyal to the Barbarian Boss. In Forest Entrance, you can see Barbarians and Thieves trading the 3 remaining kidnapped princesses for Gold with the Industrial Prince. Barbarians don't reappear until much later when they're resurrected by the Necromancer twice in Wizard Castle Interior. Also, as an enemy, he wields the Barbarian Ax, Club, or Black Morning Star.

Barbarians are very detailed. Brown fur that surrounds its entire body, Common Darkgray arms with Gray Pauldrons, a cracked Dark Beige visor, two ivory/Dark Beige colored horns with some scars on them, and a khaki backpack. They possess metal shoes and dark leg clothing. Its Mask/Visor has a Inverted Drop Shape, featuring 3 lines on the visor's bottom. The mask also possesses 6 small circular holes which probably serves as Eye or Nose hole. In their very bottom of their Retangular heads, a thin line can be seen.

On their portrait, their mask is seen with a long crack, a bit shattered, and a more dynamic appearance.

Their beefy version features a Six-Pack, 3 more hip backpack belts along with a enlarged backpack(Both are also more dynamic), and their arms are clothed with a Dark-Brown Tape-textured arm sleeve, ending in the hand. Their fingers are still visible, and while they are also nailless, they have only four.

Their Shields are normal shields, and they also have Ivory/Beige colored outlines and their center is colored brown and do not have any special shape other than flat-shaped. The Shields are similiar to their user's body colors.

Barbarians are one of the main antagonists of Back Off Barbarian, along with Iceskimos and Fire Demons.

to perform. Tosses an ax that damages normal enemies.

to perform. Tosses an ax that damages normal enemies.

Barbarian's "Blunt Weapons" Splash Attack is a decent option, for Juggling. It is not to be considered boss slayer material. Overall Barbarian is an average character that like most average characters struggles in difficult or time consuming levels like Desert or Full Moon

Barbarian's incredibly easy to pick up and learn. Since he has Magic that doesn't really help him too well, it is best to use a Strength heavy weapon or a Magic heavy weapon that does not deduce from Strength. Make sure to attribute to Magic early on, at least for the Elemental Infusion, first.

Barbarian is a below average character that is also the gold standard just like the Arrow Rainers.

Restrict Bear's options to several 50/50s. but counter with a Shield bash. Caution is advised.

A slightly weaker version of Blue Knight. His Magic Projectile and Air Projectile can be converted to a confirm, another 50/50. Difficult match-up.

Punish on whiff. If Alien is in Icy Arena with Rammy, he can huddle in a corner.

A weaker Orange Knight, thus a weaker Fire Demon. However, Pink Knight has the same physics as Conehead/Gray Knight/Royal Guard, so caution is advised.

His Air Projectile is the same, which could lead to a confirm.

Punish on whiff. Watch out for his Splash Attack because it is a 50/50.

Punish on whiff. However, Hatty Hattington has the same physics as Conehead/Gray Knight/Royal Guard, with its Magic Projectile and Air Projectile, so caution is advised. 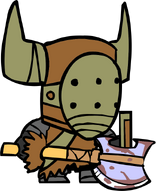 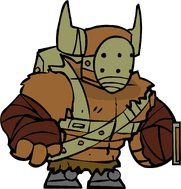 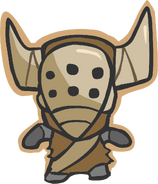 The titular antagonist of Back Off Barbarian and sprite.

Killer Beekeeper; the character that Barbarian unlocks after completing the game. 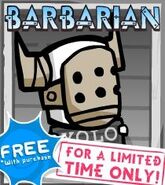