50 (+0% DMG)
Alien (or Alien Hominid) is an enemy and also one of the 31 Playable Characters in the game Castle Crashers. Their magical attacks are Fire and Non-Elemental. Their starting weapon is the Alien Gun.

Aliens are first seen using their Alien Ships to attack the player(s) in Desert where they also abduct the player(s) via tractor beam. Afterwards, Aliens are seen trying to deal with the player(s) by clustering up in Alien Ship where also one buffed Alien escapes and starts the self-destruct sequence. Finally, An Alien is resurrected by Necromancer in his room in Wizard Castle Interior.

Birthed from the creative minds of Dan Paladin and Tom Fulp, the Alien is one of the most iconic The Behemoth characters. Alien is colored entirely in yellow. Alien has big black, bug-like eyes, two antennas as ears, a zigzag face, and ostensibly appears to be wearing black pants. The Aliens also appear to have a plumber's crack that peeks out of their black pants.

Fires a wide, orange, continuous ball of energy with his ray gun. Can hit multiple enemies if bunched together. Can be fired three times as often as other Splash Attacks while on the ground. Causes burn damage. The explosion effect can, and will, launch enemies incredible distances, or so high that they'll take fall damage, regardless of their weight group.

Fires a small yellow ball of energy with his ray gun. When fired in the air, it does normal magic projectile damage. However the aerial attack differs from all others because Alien receives no knockback from it, which makes implementing the attack into a juggle awkward, and sometimes impossible.

Fires a small yellow ball of energy with his ray gun. When fired in the air, it does normal magic projectile damage. However the aerial attack differs from all others because Alien receives no knockback from it, which makes implementing the attack into a juggle awkward, and sometimes impossible. An advanced use of Juggling, named Spellweaving, can use this Air Projectile for flashy techniques.

to perform. Engulfs enemies in flames, with a nice hit of Damage over Time. Combined with the large amount of enemies with weaknesses to fire, this combo can be very powerful.

Alien utilizes its nearby titular Tractor Beam as a Magic Jump. Very bright and flashy.

Alien is an average character with its abilities. A downside of using Alien is its lack of adaptability as Alien can not switch out its Alien Gun for anything else. In addition, despite its potent spamming potential, the "Comet" Splash Attack is notably weak in large crowds of enemies, despite having the potential to knock back several enemies.This is most notably seen in the Troll Mother fight in Thieves' Forest and Marsh, and the Necromancer fight in Wizard Castle Interior, respectively.

Alien can be stat attributed to Strength first. Has an easy time with the levels. Animal Orb selection does make a bit of difference. The top 3 in Piggy, Snoot, and Hawkster should suffice.

One of the most powerful Arena characters in the game. Aliens can use their "Comet" Splash Attack as a good neutral tool and as area denial in certain matchups and a key Arena theme. 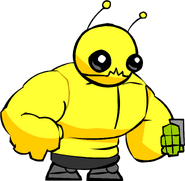 The Alien from his original game, Alien Hominid. 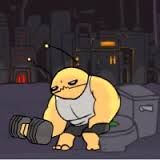 An Alien Crowd, as seen in the Alien Ship(Level).

The Alien Ship; A Mini-Boss that spawns Alien Hominids. 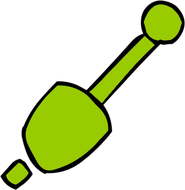 The Alien Gun; Weapon used by Alien Hominid to shoot particles at targets. 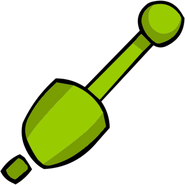